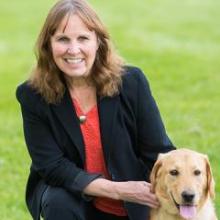 Dr. Amelia Simpson, OVMA president, said Tornquist’s dedication to the college has helped it grow by leaps and bounds under her leadership.

“Dean Tornquist is a seriously accomplished scholar, scientist, professor, and administrator,” Simpson said. “From the quarterly updates, I see how much effort she is putting in to make certain her students thrive. From doing all she can to fundraise for scholarships to help offset the rising costs of becoming a veterinarian to bringing a wellness counselor for the school, and the list goes on.”

Simpson said Tornquist has an uncanny ability to lead and inspire students at the college.

“She has a connection with the students, a relationship that, at the risk of being totally corny, is a beautiful thing to see.”

Tornquist received the award on March 7.

Tornquist, who has been interim dean of the College of Veterinary Medicine  at Oregon State University since October of 2013, was named dean of the college in March 2015. Tornquist has been on the faculty at Oregon State since 1996 and previously was associate dean of student and academic affairs in the college, where she also is a professor of clinical pathology.