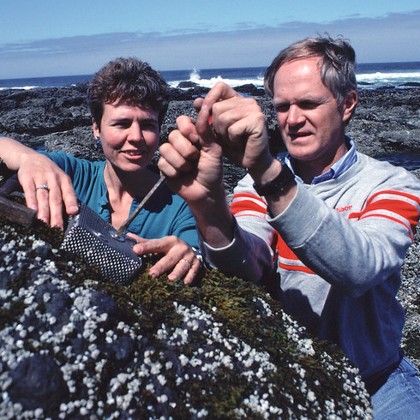 Bruce Menge, OSU Distinguished University Professor of Integrative Biology and the Wayne and Gladys Valley Chair of Marine Biology, was inducted into the American Academy of Arts and Sciences on Saturday, Sept. 10, in Cambridge, Massachusetts.

The same day as Menge’s induction ceremony, his wife, University Distinguished Professor Jane Lubchenco, was inducted by Pope Francis into the Pontifical Academy of Sciences at the Vatican.

The American Academy of Arts and Sciences was founded in 1780 during the Revolutionary War by 62 scholar-patriots including John Adams and John Hancock.

Menge, who has been conducting research at the Oregon coast for four decades, was elected to the academy in 2020 but his induction was postponed due to the pandemic.

The academy notes that Menge “pioneered long-term studies within individual sites, and extended those studies to regional and global biogeographical scales. He has been truly integrative in his reach, explicating the roles of predation, competition and disturbance as structuring forces.”

Earlier this year, Menge published a study showing that ecological communities on the Oregon coast are being subtly destabilized by the pressures of climate change despite giving an appearance of stress resistance.

Findings, which appeared in the Proceedings of the National Academy of Sciences, show that ecological communities in Oregon’s rocky intertidal zone have grown less stable for at least a decade though their structure – the organisms that comprise them – has basically stayed the same.

The community destabilization arises from decreasing resilience – the ability to bounce back from disturbance.

Lubchenco, the Wayne and Gladys Valley Professor of Marine Biology at OSU, is past president of the American Association for the Advancement of Science, the Ecological Society of America and the International Council for Science.

The Pontifical Academy of Sciences was established with its current name in 1936 by Pope Pius XI and traces its roots to the Academy of the Lynxes, founded in 1603 as the world’s first exclusively scientific academy. Membership is limited to 80 academicians worldwide and is based solely on scientific merit and moral character, regardless of religious affiliation or beliefs.

One of the world’s leading and most highly cited ecologists, Lubchenco is a former administrator of the National Oceanic and Atmospheric Administration and also spent two years as the State Department’s first U.S. Science Envoy for the Ocean.

She is on loan from Oregon State for the duration of her White House appointment.