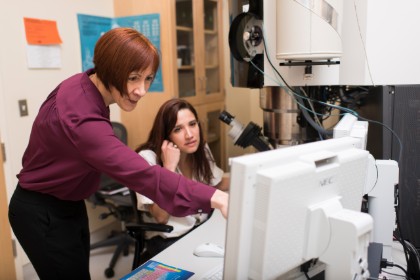 Melissa Santala, associate professor in the Oregon State University College of Engineering, has received a Fulbright U.S. Scholar Program award in materials science for the 2022-23 academic year, the U.S. Department of State and the Fulbright Foreign Scholarship Board have announced.

Under the program, Santala will conduct basic research on materials used as catalysts at the Israel Institute of Technology in Haifa during a four-month Distinguished Scholar Fellowship. A catalyst speeds the rate of a chemical reaction without being consumed by the reaction.

Santala is one of more than 800 U.S. citizens who will conduct research and/or teach abroad during the 2022-23 academic year through the Fulbright U.S. Scholar Program.

Santala’s Fulbright grant is titled “Collaborative studies supporting optimization of heterogeneous catalysts: adhesion and coarsening of platinum particles supported on aluminum oxide.” Heterogenous catalysts are those whose phase – liquid, solid or gas – differs from that of the reactants or products.

Her work will help establish a collaboration with researchers in Haifa to better understand fundamental physical processes that affect the efficiency and environmental impact of platinum-containing heterogeneous catalysts.

The Fulbright Program is the U.S. government’s flagship international educational exchange program and is also supported by partner countries around the world. The program is funded through an annual appropriation made by the U.S. Congress to the U.S. Department of State’s Bureau of Educational and Cultural Affairs.

Since being established in 1946 under legislation introduced by the late Sen. J. William Fulbright of Arkansas, the program has given more than 400,000 students, scholars, teachers, artists and professionals of all backgrounds and fields the opportunity to study, teach, conduct research, exchange ideas and contribute to finding solutions to shared international concerns.

The list of Fulbright alumni includes 61 Nobel Prize laureates, 88 Pulitzer Prize recipients and 40 people who have served as a head of state or government.