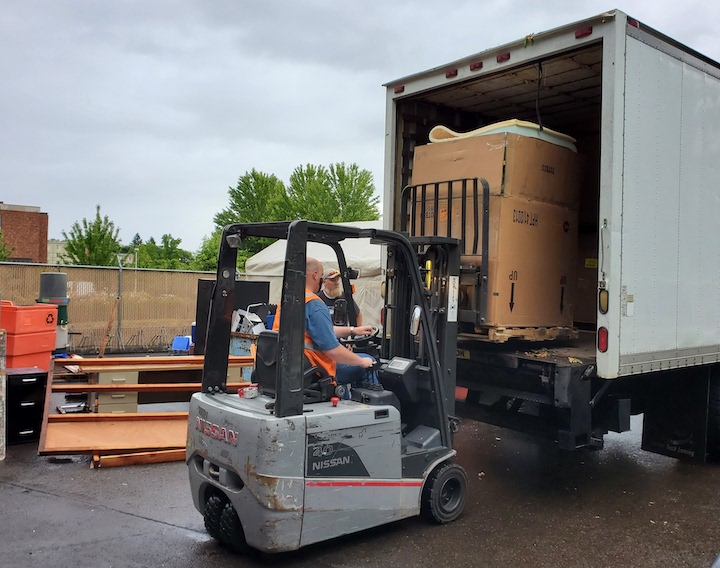 Rae DeLay doesn't understand it, but every year, there they are again: brand-new items, not a scratch on them, left behind in Oregon State University residence halls.

Sometimes, she said, they even still have the price tags.

The residence hall recycling and donation drive, which started in 2009, is an effort that redirects tons of items - literally - that would otherwise go straight to mid-valley landfills.

At its height in 2017, the move-out collected almost 36,000 pounds of leftover clothing, school supplies, electronics, bedding, linens, household items and other materials students decided they no longer needed.

"If we didn't have this, it would go in the garbage," DeLay said. "We are able to defer everything from the landfill and get it to people who can use it. That's really why we do this."

This year's move-out is smaller than previous events. Normally, there would be so many items that DeLay and her crew would sort them at the Benton County Fairgrounds instead of on campus at the OSUsed Store.

Because of the COVID-19 pandemic, fewer students chose to live on campus. Those who did haven't had the same rush to clear out of town, because finals have been given online and some have wrapped up earlier than usual.

In pre-pandemic times, students often didn't start packing up until they were suddenly faced with the move-out date, said Steve Schofield, maintenance coordinator.

The result: With half the 1,800 student residents moved out as of Thursday, just 12 of the 4x4x4 cardboard boxes known as gaylords have been filled with leftovers, instead of the usual 24 to 48.

More is coming, however. First, the rest of the students are on their way out in the next couple of days, and DeLay is expecting plenty of additional items to sort.

The move-out event "encourages our students to be more fiscally and environmentally responsible," she said. "A lot of them don't have vehicles or other resources to donate themselves. This gives them that opportunity, by giving them the resources to do the right thing."

In addition, something else that's new this year is an off-campus move out event, a partnership between OSU and the Linn Benton Master Recyclers program. That will be held from 10 a.m. to 3 p.m. Saturday through Monday, June 12-14, at the parking lot adjacent to the OSUsed Store, at the corner of 13th and Washington streets.

Furniture, electronics, sealed and nonperishable food, books, mattresses, kitchenware and other reusable goods in good repair or working condition will be accepted at the parking lot and redirected to Teen Challenge and the Linn Benton Food Share.

The event is being promoted for OSU students who live off campus, but DeLay said other donors will not be turned away.

"We expect, probably, a lot more larger items," she said.

This isn't the first time an off-campus donation has been held, but it's the first since 2019 and covers three days instead of one afternoon.

OSU Surplus and Campus Recycling already has its hands full just clearing out residence halls and doesn't have the bandwidth to take on an off-campus event at the same time, DeLay said.

OSU's Community Outreach program, which had taken charge in previous years, wasn't available this time. So when the Master Recyclers came looking to coordinate a project, she said, "it seemed like it was a logical combination."

The money from the sales helps cover the costs of doing the work, DeLay said. But at least 90% of the donated items go to nonprofits.

"Re-use is the ultimate goal," she said.