Forging a friendship on the road 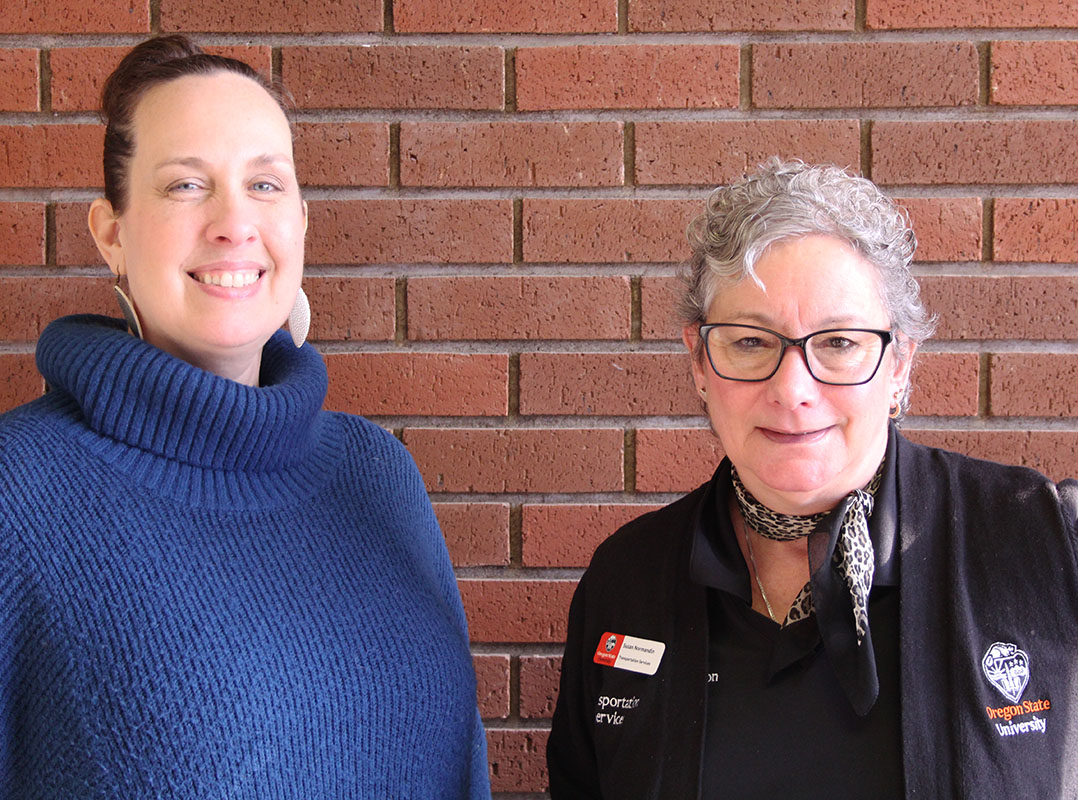 When Susan Normandin and Brandi Cox sit down together and start chatting, it would be easy to assume they’ve been friends for years. But until last fall, the two women, who work on opposite ends of the OSU campus, had never set eyes on each other.

Normandin, who is a cashier with Transportation Services, normally drives to work from Albany with her husband Scott, who works in the Carlson College of Veterinary Medicine. But Scott found out last fall that he needed hip replacement surgery, and was going to be recovering at home for a few months, and that news sent his wife into a panic.

Luckily, Normandin’s co-workers in Transportation Services were well versed in alternative ways to get to work. They pointed her toward the “Get There Oregon” program, which is a free online ride matching and trip planning tool. She signed on, hoping to find someone in her neighborhood who had a similar schedule and would be willing to drive her to and from work while Scott was recovering.

While there around a dozen people that loosely matched her needs, the only one who contacted her was Cox, who works as an office manager with Seed Certification, and who happens to live about two miles from the Normandins. Cox was tired of commuting alone every day on Highway 34, and hated seeing so many solitary drivers going to the same destination. So she put her name on the list hoping for some company, and to reduce her own commuting impact.

Both women were very nervous about the idea of driving every day with a stranger, so they decided to meet for lunch to suss each other out. The meeting was so successful that Normandin decided to invite Cox over to her house for lunch so she could also meet her husband. The lunch conversation quickly turned to an all-afternoon discussion involving a lot of laughter, and a friendship was born.


Eventually Cox brought her two teen sons over to meet the family, and since then, the families have been fairly inseparable. When she realized that Normandin avoided driving at all costs, she offered to help her with things like chores while her husband was unable to drive.

“She took me grocery shopping to WinCo three weekends in a row,” Normandin said, and helped her plant bulbs in her front yard, while one of Cox’s sons even mowed the Normandins’ lawn. Family visits have become the norm, and it’s gone far beyond just a way to get to and from work.

Cox bought Scott a travel mug with “I’m hip” on it to honor his hip replacement surgery. Scott took photos of Cox and her sons for their Christmas cards, and even paid for the printing.

“Instantly you could tell what type of people they are,” Cox said. “They’re genuine people, and I had no worries or concerns.”

In the car the women have shared a lot of stories, and found many things in common, like their love of dogs, their passion for Christmas, and a strong mutual sense of humor about life. Now they can’t wait to tell each other stories about the silly things that happen during their work day.

“It’s been funny,” Normandin said. “It was something so scary and fearful to me, Scott’s surgery and what I was going to have to do to get to work. And it turned into something so good.”

Cox agreed. “It’s been an enjoyable experience to have somebody to talk to,” she said. “Now you can take your time and enjoy who you’re with, and it’s sad that it’s coming to an end.”

Scott has now fully recovered, but recently Cox’s car broke down, so the Normandins have been driving her with them to work each day. Eventually, the original reasons they started carpooling will end, but neither Cox nor Normandin really wants to give up the fun commute they’ve created together.

“We might do this some more,” Normandin said with a smile and Cox nodded.