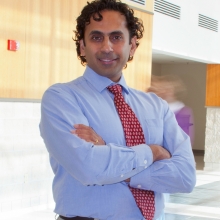 Regan Gurung has been appointed as interim executive director for the Center for Teaching and Learning at Oregon State University, effective Aug. 26. The appointment was announced by Alix Gitelman, vice provost for undergraduate education.

Gurung, who joined the psychology faculty in the School of Psychological Science earlier this year, is an internationally recognized and widely published figure in the science of teaching and learning, as well as in social and health psychology. He is the author, coauthor or editor of 15 books, and has published over 150 peer-reviewed journal articles and book chapters. He is the founding co-editor of the American Psychological Association’s journal, Scholarship of Teaching and Learning in Psychology.

An accomplished educator, Gurung has won the America Psychological Association’s highest teaching honor, the Charles L. Brewer Award for Distinguished Career in Teaching Psychology; the Carnegie Foundation’s Wisconsin Professor of the Year; the University of Wisconsin System Regents’ Teaching Excellence Award; and numerous University of Wisconsin Green Bay teaching awards. He also served as the president of the Society for the Teaching of Psychology and is currently the president of Psi Chi, the international honor society in psychology.