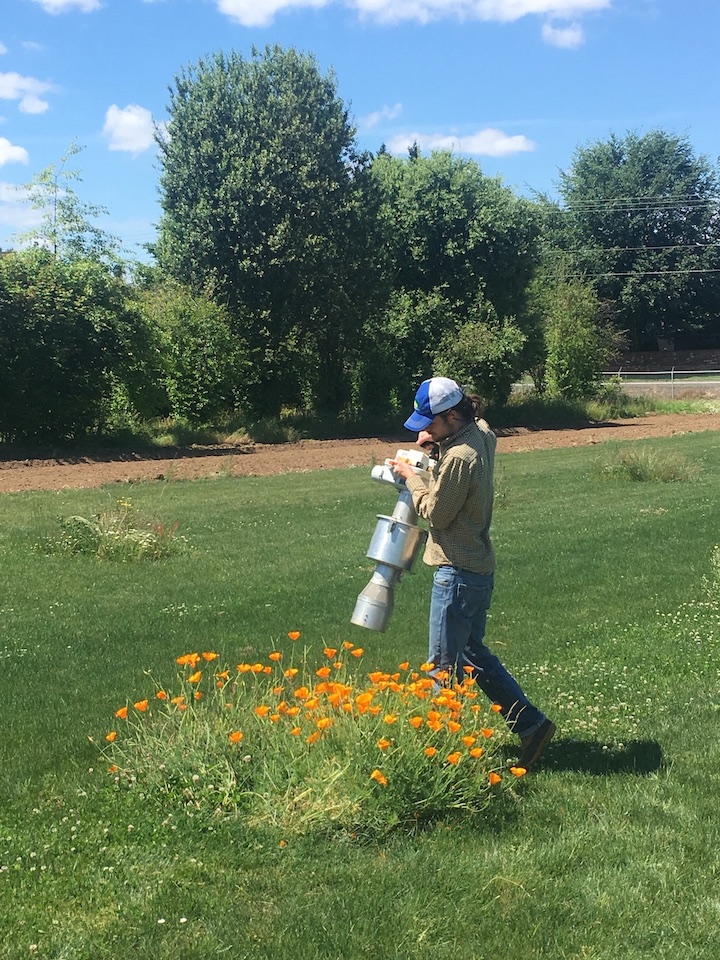 Aaron Anderson, a graduate research assistant in the department of horticulture at Oregon State University, has been selected a 2021 American Association for the Advancement of Science Mass Media fellow, a highly competitive fellowship that draws hundreds of applicants for only 30 slots.

Anderson will spend his 11-week fellowship as a science writer at the St. Louis Post-Dispatch. AAAS offers fellowships to increase scientific literacy in media.

“It gives scientists the training they need to pursue science communications,” Anderson said, “Even if they don’t, when they come back to the lab or field, they know how to communicate their work and get their research out there.”

Anderson has bachelor’s degree in biology with a concentration in ecology and evolution from Cornell University. At OSU, he works in the Ecology Lab of his advisor, Gail Langellotto, a professor in the Department of Horticulture and statewide coordinator of the OSU Extension Master Gardeners. Since 2016, Anderson has managed and conducted field study to determine how attractive 23 native Willamette Valley wildflowers are to pollinators.

"Aaron is an excellent recipient for this fellowship., Lanellotto said.  “He has been honing his science communication skills with many different audiences, in many different formats, and for many years.”

Anderson said he’s been thinking about science writing for a couple of years, and working with Extension has solidified his interest.

“I’ve always done some writing on the side.,” he said. “I’ve had the opportunity to write a couple of articles for the public. I enjoyed the process of researching and interviewing people to craft a story that people can read and digest. Now I get to use what I’ve learned for Extension, which

I think it is such an important program because it gets practical science into the hands of people who will use it on a daily basis. I think programs and publications that help identify and communicate useful findings are an essential part of the science world”

Anderson knows it’s difficult to break into journalism and odds are slim of getting a job without experience. But it isn’t necessarily journalism he’s got his eyes on. He would like to work for a non-profit once his thesis has been accepted.

“I am serious about becoming a science communicator, whether as a full-time vocation or as just part of my career remains to be seen,” he said. “One of things I’m really interested in is working post-PhD for a nonprofit doing conservation work. They wear lots of hats. Some of it would be wrapped up with writing.”

Anderson has won many awards, including the Montane M. Freeman Scholarship in Native Plant Studies from the Garden Club on America, the Leighton Ho Memorial Field Botany Award from the Native Plant Society of Oregon and the ARCO-Swallow Fellowship from OSU.

In his work in Langellotto’s lab, Anderson studied which native plants are most attractive to pollinators and which are acceptable to gardeners’ aesthetic. If no one uses native plants in their gardens, it’s not as useful, so that’s a big consideration.

“I showed photos with the 11 best pollinators on the plants to gardeners and gave information about the pollinator,” Anderson said. “I asked how likely they were to use the plants. The plants and pollinator connection have the potential of a symbiotic ecological beauty. We have to consider the larger picture. Sure, a plant might be attractive, but what will it do for the whole diversity?”

Anderson credits Extension for stirring up his interest in science writing. In addition to his field work, he gives trainings, leads volunteer programs and conducts field days, which are events to disseminate the newest research to the public.

but I think it is such an important program because it gets practical science into the hands of people who will use it on a daily basis. I think programs and publications that help identify and communicate useful findings are an essential part of the science world.

“Over the past few years, I have also written several articles for popular magazines, short articles for Extension sites, and guest blog posts,” he said. “As a result, I have become increasingly interested in pursuing science writing as a career. Science writing is a wonderful way to connect people to issues that matter to them, and to increase scientific literacy. Besides, it’s simply fun to read about science, talk to people about science, and tell their stories! I’m thrilled about the opportunity to join the St. Louis Post-Dispatch for the summer and develop my science writing and reporting skills.”