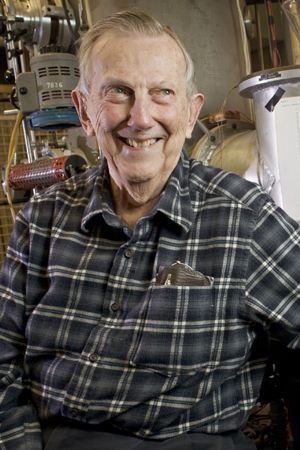 Alumnus and professor emeritus of chemistry Ken Hedberg died in his sleep on Jan. 5, 2019. He was 98. Born in Portland, Oregon to Gustave and Ruth Haagsma Hedberg, Hedberg was the oldest of two children.  He was raised first in Portland, then in Hoquiam Washington, and finally in Medford, Oregon where he finished high school.

Hedberg graduated from Oregon State College in 1943. During World War II, he sought and received military deferment in order to put his knowledge of chemistry to use in the war effort.  For the duration of the war he worked at Shell Development Co., researching ways to make synthetic rubber, and finding additives to keep fuels stored in the North African desert from exploding.

After the war, he was mentored by Linus Pauling at the California Institute of Technology and received his PhD there in 1948, before returning to Oregon State in 1956 to join the chemistry department. While he retired in 1987, he continued an active research program at Oregon State for another 30 years.

Before returning to Oregon State, Hedberg received both a Fulbright and a Guggenheim Fellowship that took him to Norway. There he met his future wife and fellow scientist, Lise Smedvik. The couple collaborated extensively and married in 1954 in Oslo, Norway.

At Oregon State, he worked as a physical chemist, where he established a research program that focused on the structural analysis of various compounds using an electron diffraction apparatus that he designed and built himself. Hedberg earned an international reputation, having determined the structure of dozens of molecules throughout his career, including Carbon-60—known as the “Buckyball”—and compounds of xenon, a noble gas. He was a pioneer in the development of electron diffraction and the study of molecular structures and intramolecular dynamics.

Throughout his career, Hedberg collaborated with scientists around the world and continued to work closely with his wife as well. He was a Fellow of the American Physical Society, the Royal Norwegian Council for Scientific and Industrial Research, the American Association for the Advancement of Science and the Sloan Foundation; a member of the Norwegian Academy of Sciences; an OSU Distinguished Professor and has received many other honors. In 2005, he  received the International Barbara Mez-Starck Prize, a distinguished honor awarded to scientists who have made outstanding contributions to structural chemistry. In 2016, Hedberg received the inaugural College of Science Lifetime Achievement Award.

Hedberg is survived by his wife Lise, and children Erik and Katrina and four grandchildren, Lindsey, Allison, Annika and Peter.  A celebration of life will take place on what would have been his 99th birthday: Feb. 2, 2019, at 2 p.m., at the OSU Foundation, 4238 SW Research Way, Corvallis, Oregon.  In lieu of flowers, the family asks that donations be sent to the Ken & Lise Hedberg Student Endowment Fund in Chemistry, OSU Foundation.