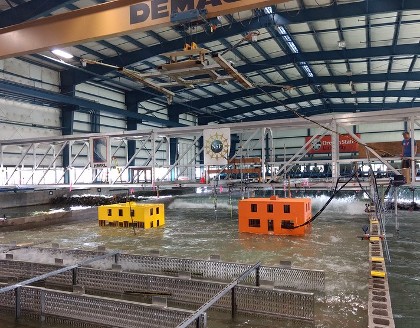 Japan’s Port and Airport Research Institute has conferred its annual Hamaguchi Award on Oregon State University’s O.H. Hinsdale Wave Research Laboratory for its contributions to the understanding of tsunamis and other coastal hazards and for its disaster prevention work.

Pedro Lomonaco, the lab’s director, received the award Nov. 8 at a ceremony in Tokyo. Presenting the award was Hideo Onishi, state minister of land, infrastructure, transport and tourism.

Each year the Hamaguchi Award goes to an individual or an organization that has made significant scientific or pragmatic contributions to the enhancement of community resilience against tsunami, storm surge and other coastal disasters.

The award, established in 2016 after the United Nations the previous year designated Nov. 5 as World Tsunami Awareness Day, is named for Hamaguchi Goryo, who saved people in his village from a tsunami in 1854. He prompted his fellow residents to evacuate to higher ground by setting fire to sheaves of rice, his whole year’s harvest, as a warning signal.