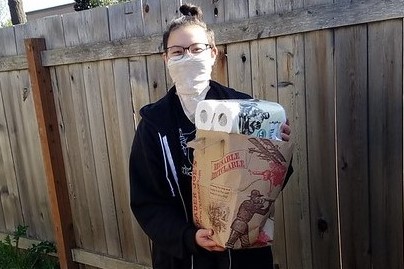 In late February, the Coalition of Graduate Employees union at Oregon State formed a mutual aid caucus to help people in the local community. The group planned to kick things off with a fundraiser on Pi Day, March 14.

Then the new reality of COVID-19 hit.

“We realized really quickly, that we can’t have an event where a bunch of people come to together and share pie,” said Jessee Svoboda, a doctoral student in bioengineering and a member of the mutual aid caucus. “And, also, we should see what our community needs right now and what we can do about it.”

They quickly pivoted. Modeled after mutual aid networks in Seattle and Portland, Svoboda built a pair of publically sharable Google forms. One for requests from people with needs, such as grocery delivery, prescription pick-ups or childcare. And one for volunteers interested in fulfilling those requests.

Svoboda, who uses gender-neutral pronouns, was motivated in part by frustration with the government response to COVID-19.

“Individually we may not have a whole lot of power but collectively we do,” they said. “I feel really strongly that collective power is an amazing tool and that we should utilize that to help each other, protect ourselves, protect our community.”

In just a couple weeks, working with the Benton County Family Response Team, the group has filled around 50 requests. And more than 200 people have signed up as volunteers.

Food delivery is the most common need. Others requests include help with laundry because many laundromats are closed, deliveries of art supplies and books to help keep children occupied, and, simply, conversation.

Also, many people have asked for financial assistance to pay for bills, rent or prescriptions. Initially, the group wasn’t set up to help for those requests. Now, they have set up a mechanism to accept monetary donations. They have already raised more than $1,200.

Svoboda’s leadership impressed Robert Kirby, who knows Svoboda because they both volunteer at Stone Soup, a Corvallis nonprofit that provides meals for people in need. Kirby is the executive director and campus pastor at WestM, a multi-denominational student ministry organization in Corvallis.

“As this continued to unfold over the last few weeks they were making sure they were out there on the forefront of it – in terms of listening to people’s needs, listening to how people may be able to help and then figuring out how to connect those dots,” Kirby said. “I have just been impressed with their ability to quickly throw all this together.”

Looking back at recent weeks, Svoboda said it can sometimes be hard to see firsthand the benefit of the volunteer efforts because of limited in-person interaction. But, that is changing, especially as they makes repeat visits to people in need.

“You’re like, ‘oh, yeah, I can drive to this house or bike to this place without using Google Maps now,” they said. “It’s still building community, even if you can’t do it face to face. That’s pretty cool, especially in a really isolating time.”