Mural, mural, on the wall, who's included? One and all

Buying the perfect gift is never easy. Especially when the gift you need to select isn’t for one specific special someone but rather for unknown future someones.

At Oregon State University’s Carlson College of Veterinary Medicine, the graduating class of 2021 wanted to give a class gift “focused on the student population and how we could best serve future students for years to come,” said Dr. Masson Blow (DVM ’21). “With that being said, we wanted to stay away from the traditional benches, picnic tables or a single scholarship.”

Just inside the south entrance of Magruder Hall is a blank wall with a doorway in the middle. It is the perfect canvas for artist Chanti Maῆon, an ethnic studies and studio art major at Oregon State. She’s painting a mural centered around the doorway.

Her brushstrokes fill in the faces of veterinarians wearing traditional white coats. Faces that are brown and black, tan and peach. Her brushstrokes line in the triangle nose of a lioness, the floppy ears of a rabbit, the scales of an iguana, the vibrant feathers of a macaw.

“We want the mural to highlight the growing diversity of the veterinary community. So we wanted to have individuals from multiple racial/ethnic backgrounds depicted, represent the LGBTQ+ community, as well as show support to people with disabilities,” Blow said. “Additionally we wanted to have a broad representation of some of the animals that we as the class of 2021 will be treating post-graduation.” 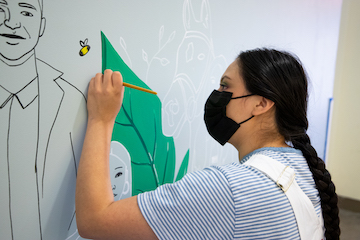 The initial idea for the mural came as a response to cultural climate the class find themselves graduating in. “The mural idea was created shortly after experiencing and viewing the national and international unrest associated with racial/social/sexual injustices, inequalities, and murders that plagued the nation during the years leading up to and culminating in the summer of 2020,” Blow said. “We as a class felt that as leaders in our communities we had a responsibility to stand up and speak out for what we believe is right and to let our beliefs be known not only on social media or within our circle of friends but to share our beliefs in our everyday lives. So we decided that a mural focused on diversity and inclusion was the best way to show our beliefs and offer support to future classes as well as to anyone who visits our college. We wanted to show our class in solidarity despite our differences in background to empower others.”

Maῆon echoes that sentiment. “Hopefully people seeing people of color and more diverse communities – seeing themselves, even if it's just in a mural – will help make it feel more like this space is for them.”

Blow imagines future students standing in the doorway in the middle of the mural – seeing themselves within the community, seeing themselves included. “I hope that people would insert themselves into the mural and become a part of it,” Blow said. “It is an embodiment of us all and aims to represent each and every one of us in the pursuit of our dreams."