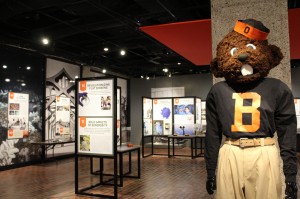 “Oregon State University: A Legacy of Transformation,” an exhibit that commemorates the university’s 150th anniversary, will be showcased from Feb. 10 to Sept. 9, 2018 at the Oregon Historical Society in Portland.

Oregon State University is commemorating its 150th anniversary with an exhibit at the Oregon Historical Society that shares the history of the university through 150 stories.

The exhibit is nearly 3,000 square feet and has many unique features, including:

An interactive digital 5 foot by 3 foot table that tells 150 OSU stories;
The school bell from Corvallis College, Oregon State University’s original name;
A digital interactive whale activity designed to give attendees a sense of how whales feed; and
A re-creation of OSU’s Memorial Union, including an interactive coffee table that plays the sounds of Oregon State from the alma mater to the OSU fight song.
The exhibit also tells the story of some of Oregon State’s talented graduates. These include Dick Fosbury (’72), whose back-first high jump technique — the Fosbury Flop — revolutionized the sport and won him a gold medal at the 1968 Olympics.

Other stories include: Douglas Engelbart (’48); who invented the computer mouse; award-winning animator Harley Jessup (’76), who brought characters to life in Monsters Inc., Ratatouille, and other movies; and Bernie Newcomb (’65), who cofounded E*Trade, one of the first internet stock-trading companies.

“This exhibit shows how Oregon State University has transformed the community, the state, the nation and the world,” said Steve Clark, Oregon State’s vice president of university relations and marketing. “We hope to inform and engage visitors and also surprise them with many things they may not already know about OSU.”

“Visitors will likely see familiar things, but also be surprised by many things.” 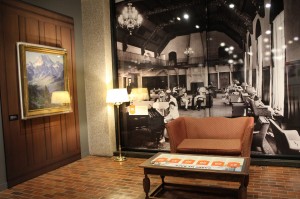 A recreation of the Memorial Union

Kerry Tymchuk, executive director of the Oregon Historical Society, said he is delighted to host an exhibit that will shine the spotlight on the rich history of Oregon’s first public institution of higher education.

“Whether you are a proud member of ‘Beaver Nation,’ or someone who is unfamiliar with OSU, I am confident that you will leave the exhibit with a deep appreciation for the vital role that the university and its graduates have played in the history and culture of our state and nation,” Tymchuk said.

In conjunction with the exhibit, Oregon State will hold a series of events at the museum, including a book talk by William G. Robbins, an emeritus distinguished professor of history, who wrote “The People’s School: A History of Oregon State University.” The talk, which is free and open to the public, is from 7 to 8:30 p.m. March 1.