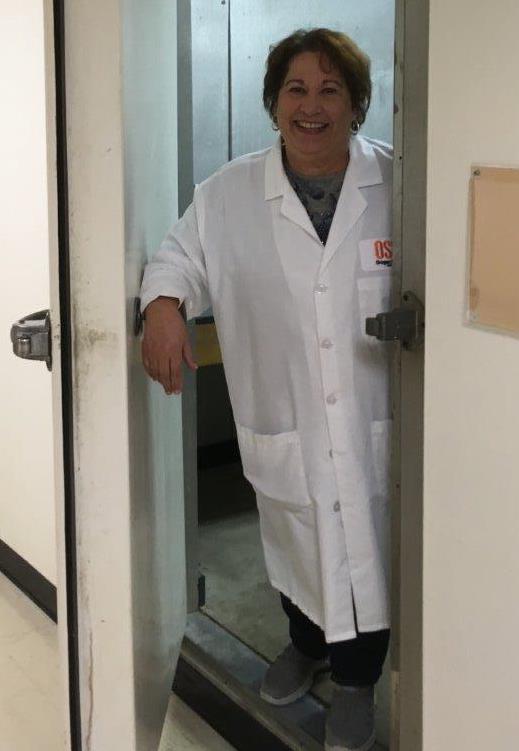 In Nash Hall, the Department of Microbiology has 30 labs spread over three floors. Decades’ worth of samples and specimens are housed in dozens of minus-80 degree C freezers throughout the building. In some cases, researchers’ entire careers depend on those frozen cultures. If a freezer suddenly malfunctioned, all would be lost.

But have no fear: Cindy Fisher is here.

Fisher has been the building manager of Nash Hall for 39 years. In that time she’s also served as a lab tech, culturing bacteria for the microbiology undergraduate teaching program; and as the culture collection curator, keeping track of freeze-dried samples that date back to the 1940s and are still sometimes requested today.

She can rattle off a list of past and current research projects conducted in Nash, from bacteria discovered deep in the ocean to natural organisms now being used in yogurt.

“My duty is to support these people in their primary job of doing their research,” Fisher said. “If we were a MASH unit, I’d be the Radar of the unit.”

Though Nash first opened in 1970, over the last 15 years the building has been updated, including the HVAC and sprinkler systems. But it’s had its share of mishaps.

Years ago, Fisher recalls, she came in during the summer and there was water cascading from the sixth floor to the basement. The main water line had burst on the top floor.

During the COVID-induced campus shutdown, when most researchers are staying home or only visiting their labs once a week, she wants to make sure nothing like that happens again.

So every day, she walks the halls, checking on all the freezers to make sure they’re still freezing. She looks over each lab at least twice a week to see if anything is amiss.

Fisher also led the charge on collecting microbiology’s contribution to the campus-wide personal protective equipment (PPE) donation to local health care workers. Before researchers vacated campus last month, they left stashes of N-95 masks, disposable gloves, scrubs and foot coverings in their offices, then contacted Fisher to tell her where to find them. She boxed up more than 1,000 items.

“That was quite a sight to see,” she said.

Fisher’s favorite part of her job is the people, so this shutdown has been difficult, especially since she’ll be retiring sometime in 2021.

“I do this not for the building itself, but for the people that I’ve met and just the relationships with all the people that have walked these halls over the years,” she said. “I’d much rather have it filled with people than what we’re doing right now.”