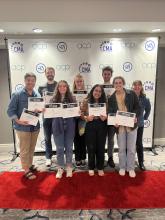 An Oregon State University senior was named top collegiate graphic designer in the nation, two OSU student magazines were recognized as being among the country’s best and OSU student journalists received more than 25 awards at several recent national media conferences.

Senior Alan Nguyen, creative lead at Orange Media Network, received the national award for Best Graphic Designer as part of the 2022 Pacemaker Awards, sponsored by the Associated Collegiate Press and announced Oct. 28 in Washington, D.C., as part of MediaFest22. DAMchic, OMN’s fashion magazine, also received a Pacemaker as one of the ACP’s Magazines of the Year.

At MediaFest22, Nguyen, Prism and DAMchic each took home multiple honors. Nguyen received ACP's top individual honor for Advertisement of the Year for OMN's media rate card, which also won a first place from CMA in the same category. In addition, he took home a third place from CMA for Best Ad Campaign and a fifth in the ACP category of Best Social Media Promotion.

Nguyen, a Beaverton resident double-majoring in design & innovation management and business analytics with a minor in marketing, didn't set out to work in graphic design. Now, he's thinking about making it his career.

"After coming to OMN, I realize that's what I'm good at," he said. "That's something I would never have thought of when I started here at OSU. It was kind of a lucky surprise."

Jaycee Kalama, who edited Beaver's Digest with Luke Reynolds last year, said she was thrilled to hear of the honor for her page spread.

"It is incredibly validating to have received a national honor, CMA's second best magazine news page/spread for our "Roe v. What?" story, because that means that our work and the message we wanted to send reached the national level," she said.

"The talent of OSU students is incredible, and I am so honored I had the opportunity to help present their work in a beautiful and meaningful way," Harris, a 2022 graduate, said following the announcement. "One of the most important things I learned while working on Prism was not to be afraid to dream big - and to ask for help in order to make those dreams come true."

"My assistant editor Kai Warouw and I put a massive amount of time and energy into helping build confidence in the team's individual visions and tackling new stories," Reeves said. "My dream was to push the design of the magazine, and I learned so much about the process of creating a successful magazine launch, working alongside a creative team who are all passionate about creating accessible and beautiful spreads."

KBVR-TV won a CMA first place for Best Video Entertainment Program. KBVR-TV and KBVR-FM earned second places from CMA in the category of Best Four-Year Stations of the Year.

"The Local Music Hour taught me that the greatest media contains a multitude of diverse voices, audio or otherwise," he said. "I'm most proud of our work that shows our community that KBVR-FM is made of unique and real people. I think this promo highlights that."

Jacob Ramirez, a 2021 cartoonist for The Barometer, OMN's student newspaper, received a first place from ACP and an honorable mention from CMA for Cartoon of the Year for his strip, Gumbo.

"It's just incredible to have any kind of recognition. I didn't even know awards were a thing. I just wanted to highlight the people behind the scenes for TV," Bottita said. "I really like getting to show off the personalities of the people who do cool things.

Added Zaine: "The amount of time, effort, stress and thought (that goes into the work) has really helped me find my passion. I care about video, I care about OMN and I'm proud to be here."