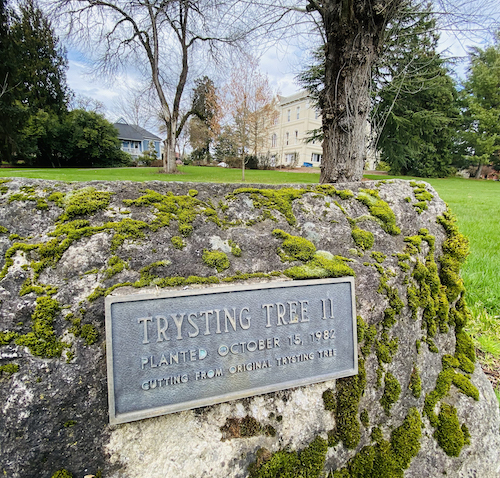 Oregon State University’s Corvallis campus has received the Tree Campus Higher Education recognition from the Arbor Day Foundation for the 13th year in a row. The Corvallis campus was first recognized in 2008.

Tree Campus Higher Education is a program that celebrates colleges and universities and their leaders for promoting healthy trees and engaging students and staff in the spirit of conservation, according to the Arbor Day Foundation.

From the beautiful magnolia trees that blossom each spring near the Memorial Union to the majestic Oregon White Oaks at the corner of SW 30th Street and SW Washington Way, approximately 6,300 trees can be found across the Corvallis campus.

The Landscape Shop, part of OSU Facilities Services, works hard to maintain and enhance campus grounds. Like the unofficial motto of the United States Postal Service, the Landscape Shop doesn’t let snow, rain or heat stop them from making sure the many trees and plants on campus are well-cared for.

While they try not to pick favorites, several members of the Facilities Services team were kind enough to share their top trees on campus.

“My favorite tree— like I could pick just one— is the Northern Pin Oak between Bexell and Weniger Halls,” said Hank Herb, who works with the Landscape Shop.

Herb added, “For its size I believe it to be overlooked. It is surrounded by concrete, asphalt and brick buildings. Yet its large structure and spanning width make it a special tree. Standing tall and wide while the world moves fast under and around it. Buildings constructed around it, walkways over its roots. Never phased, the oak continues to thrive.”

While it’s tough to choose a favorite, Facilities Services Director Joe Majeski decided on the Sierra Redwoods located south of Milam Hall in the MU Quad, adding that the tall trees inspire him.

“Redwoods are one of nature’s engineering marvels,” Majeski said.

“That particular one is mature with great form. The fact that the flowers emerge right out of the bark and that the flowers occur before the leaves do is fascinating to me,” Cross said. “They also come out early, which is a nice feature after our overcast winters.”

The Corvallis campus also features several Heritage Trees. According to the City of Corvallis website, a Heritage Tree must meet certain criteria, such as a specimen being exceptional in size, form or rarity, or having historic importance, like being a recognizable landmark in the community or associated with a noted person or historical event.

The Trysting Tree II was planted on October 15, 1982, with a cutting from the original Trysting Tree. This Gray Poplar is located southeast of Community Hall near the location of where the original tree once stood. A plaque and a bench sit next to the tree. According to the  Department of Horticulture's Landscape Plant ID website, the original tree was cut down in the fall of 1986 because of advanced disease in its trunk and limbs.

On the west side of campus stands the OSU Moon Tree, a large Douglas Fir located outside of George W. Peavy Forest Science Center along SW 30th Street. The tree was grown from seeds that were taken on the Apollo 14 lunar landing mission in 1971.

The OSU Oregon White Oak stands north of Magruder Hall. The tree is approximately 340 years old and is noted as one of the largest native oaks on campus.

The City of Corvallis has an online Heritage Tree map, which includes trees located on OSU’s campus and throughout the community.