Hi, Beaver Nation! My name is Raymond Malewitz, and I’m an associate professor in the School of Writing, Literature and Film at Oregon State University.  During the last five months, I’ve been serving as distinguished chair of American Studies at the University of Warsaw through the Fulbright U.S. Scholar Program.  When my wife Emily (OSU senior instructor of Spanish), son William, and I landed at the Warsaw Chopin Airport on Jan. 1, we did not expect that our new home city would draw the world’s attention in a few weeks.

Part of my Fulbright duties involve teaching, and during the first month of our stay, I focused my attention on prepping two classes—a public seminar on literary responses to the current SARS-CoV-2 pandemic and an undergraduate seminar on literature and science—while learning the basics of the city and Poland’s rather challenging language. Like everyone else in Warsaw, I was also keeping an eye on the news, which was consumed by reports of Russian military build-up near Ukraine’s border. As tensions rose, all conversations with my new friends and colleagues turned to questions of what would happen next. Would there be war in Ukraine? What would be the American and European response? And what would happen to Poland?

We all felt pretty powerless in the face of these profound questions, and to combat this feeling, we looked to volunteer where we could. In late January, I found my first opportunity, joining with other Fulbright Poland faculty to organize a series of English conversation classes for Belarusian journalists living in Warsaw. The journalists worked for a television station called Belsat, which broadcast free and independent programming every day into autocratic Belarus. The participants were clearly exhausted by the events they were covering, and their thoughts in class ranged from passionate resolve to a strange kind of dark humor that we had all begun to adopt in response to Russian propaganda.

On Feb. 24, Warsaw awoke to the inevitable news that Vladimir Putin had ordered Russian troops into Ukraine and, later that day, refugees began to stream into Poland from the east. Within a month, more than 3 million Ukrainian women and children would enter the country, with more than 300,000 settling in Warsaw; a city that, at the start of the year, numbered 1.7 million people. 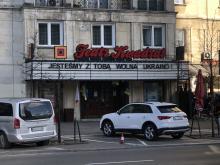 As you have probably seen on TV or read in the news, the city of Warsaw and its citizens responded to the invasion with remarkable compassion and resolve, and those reports don’t tell the half of it. Within a day, Ukrainian flags were placed on the city’s trams and busses, signs throughout the city proclaimed “Jesteśmy z wami!” [We are with you!], and everyone I knew was focused on how to make those signs true.

During the first week of the conflict, Emily and I witnessed countless acts of kindness from of our new friends and colleagues. Joining with other Varsovians, they opened rooms in their homes to people whom they had never met and volunteered at hastily assembled relief centers to greet arriving refugees and help them access medical attention, food, and psychological support. At the American Studies Center, my colleagues raced to implement initiatives to support displaced Ukrainian professors and students, while our Warsaw Facebook feeds were overwhelmed with offers to drive Ukrainian and non-Ukrainians from the border to the city, to watch children while their exhausted mothers slept, and to help them find jobs. Even my son’s second grade class got in on the collective efforts, welcoming two new Ukrainian students and organizing a successful food and clothing drive while trying to process events that they could not understand.

During the first few weeks of the conflict, my family tried as best we could to offer our help with these efforts, but our limited Polish made such efforts difficult. Through Facebook volunteer groups, we helped to sponsor a displaced Azerbaijani-Ukrainian family and, through the generous support of friends from Corvallis, another Ukrainian family. Shortly thereafter, Emily reached out to the only Ukrainian high school in Warsaw to offer our direct assistance with teaching English to their swelling student population, and she began to teach there in the evenings. I joined her in this work at the start of May and our students have been an absolute joy to teach, bringing energy and light to this dark time. Their delight in these sessions is all the more impressive given how underequipped the school was to accommodate three times the students it served before the invasion, lacking basic supplies such as pens, paper, and safe classroom spaces. To address these shortcomings, Emily has been hard at work fundraising for the school while we both try to supply the students with materials for their lessons. 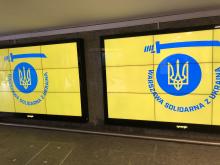 At the same time, in partnership with other faculty members at the ASC, I looked for ways in which I might help displaced Ukrainian scholars working in the field of American Studies. With the help of the Director of Fulbright Ukraine and two other ASC faculty members, I began to assemble a report to assist with future grant proposals to fund partnerships between the ASC and their Ukrainian counterparts to mitigate the future challenges of rebuilding Ukraine’s academic infrastructure.

Living as Americans in Poland during this time has been both a challenging and deeply moving experience—one that we will never forget. As representatives of Oregon State University, we hope that members of Beaver Nation will also consider helping the city of Warsaw as it continues to serve as a center of humanitarian relief.  If you would like to support the city, please consider donating to Polish Humanitarian Action at the following site: https://www.pah.org.pl/en/.  If you would like to support the Szkoła Materynka Ukrainian High School of Warsaw, please feel free to reach out to us.