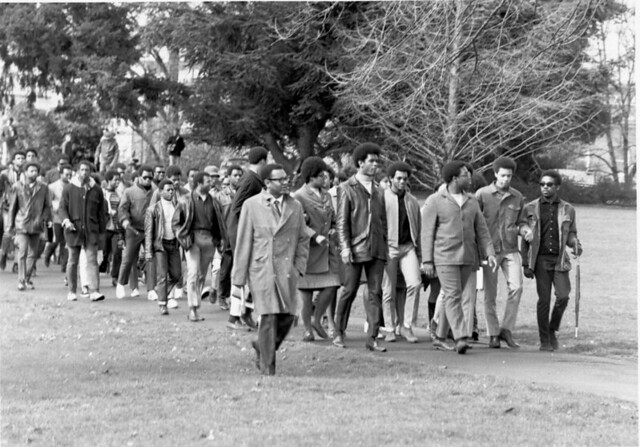 A re-enactment of an historic campus 1969 march and walk-out of black students that inspired greater multicultural programs and inclusivity at Oregon State University will take place Tuesday.

The public is invited to participate in the event, which will be held from 4 to 5 p.m. and begins at OSU’s Lonnie B. Harris Black Cultural Center, 100 S.W. Memorial Place in Corvallis.

The re-enactment event will begin with speakers at the Lonnie B. Harris Black Cultural Center. Participants will then walk through the OSU campus and close the re-enactment at Human Services Resource Center located in the Champinefu Lodge, 1030 S.W. Madison Ave.

“We want to highlight the 50-year anniversary of this historic event,” said Dorian Smith, OSU coordinator of Black Student Access and Success and one of the event’s organizers. “We also want to honor and celebrate those students who led OSU to seek more diversity and support for students of color. They laid the bricks for the university to foster positive changes that impacted future generations.”

Racial tensions flared in 1969 at OSU when then-football coach Dee Andros threatened to remove student-athlete Fred Milton from the team if he did not shave his goatee. Team rules did not allow facial hair. But for Milton and members of the Black Student Union, Andros’ ultimatum was an additional example of oppression facing African Americans across the nation.

In response, members of the BSU organized class boycotts and a sit-in at Gill Coliseum that led to a student walk-out and march across campus on March 5, 1969. Eventually, Milton and several other black students transferred to different schools.

These events prompted Oregon State to establish the Educational Opportunities Program to support the educational success of students of color. The program began in 1969 with 48 students and now serves more than 400. The Lonnie B. Harris Black Cultural Center opened in 1975, and today the university has seven cultural resource centers serving students from diverse backgrounds. OSU also established the Office of Institutional Diversity in 2015 and hired its first chief diversity officer in 2016.

The re-enactment is being sponsored by the Black Student Union, the Lonnie B. Harris Black Cultural Center, the Educational Opportunities Program and the Women of Color Caucus.