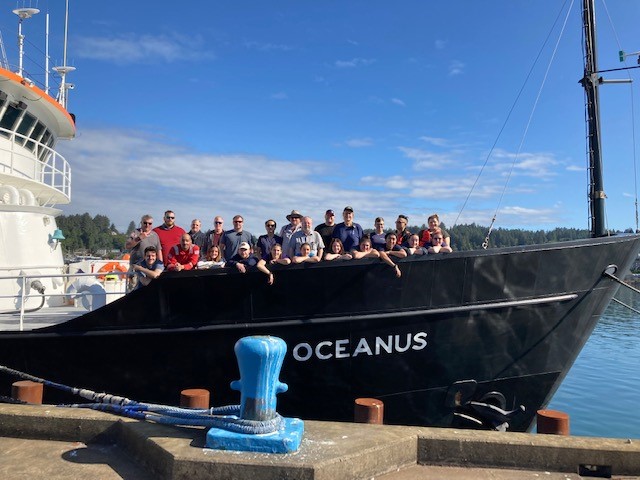 The Oregon State University-operated R/V Oceanus was in the right place at the right time recently to conduct a dramatic rescue of a fisherman whose vessel had sunk 38 miles off the coast of Newport in strong winds and waves as high as 15 feet.

Oceanus is a National Science Foundation-owned research vessel based in Newport and operated by Oregon State’s College of Earth, Ocean, and Atmospheric Sciences.

On the evening of Aug. 28, Oceanus was engaged in a trawl survey on the Pacific Ocean with a science team led by Craig Young of the University of Oregon’s Oregon Institute of Marine Biology west of Newport. Conditions were rough, with swells up to 15 feet high and winds blowing at 30 knots, according to Marine Superintendent Kaya Johnson, an Oregon State employee who oversees ship operations for Oceanus.

At the same time, Frank Akers of Coos Bay was fishing aboard his boat, the Lanola. He told the Newport News-Times around 10 p.m. a series of waves collided with his vessel, and it began to sink. “By the time I called mayday, my backdoor was halfway under,” Akers said. The boat sank so quickly that Akers, the only occupant of the vessel, had no time to don survival gear, but he was able to climb aboard a life raft.

R/V Oceanus’ captain heard Akers’ mayday radio call and confirmed the fishing vessel in distress was only one nautical mile away.

“The captain indicated science operations would need to end, and all equipment must be removed from the water in order to render assistance to the sinking vessel,” Johnson said. “The ship’s general alarm was signaled, and PA announcements were made to the crew they should prepare for a rescue. The R/V Oceanus quickly arrived at the scene where debris was floating everywhere, and the vessel had completely sunk.”

The Oceanus crew spotted Akers in the life raft and made a careful approach, throwing a grappling hook to secure the life raft. “The fisherman was pulled aboard, checked for any injuries and was provided with dry clothes and blankets,” Johnson said.

“The Oceanus crew accomplished a great feat in high seas in the middle of the night, and they did so with speed and with accuracy,” said Acting Dean Tuba Özkan-Haller of the College of Earth, Ocean, and Atmospheric Sciences. “This is a testament to the high level of skill and professionalism of the crew and of OSU’s oceangoing programs.”

Akers was brought back to Newport, where he was checked over by emergency medical technicians. Akers told the Newport newspaper that he was depressed by the loss of his vessel, which he’d owned since 1986, but grateful for the efforts of his rescuers.