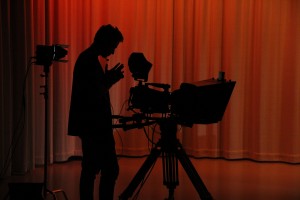 It’s Friday afternoon and five OSU students are trekking through the ghost towns of eastern Oregon working on a documentary.

A few hundred miles away on the fourth floor of the Student Experience Center staffers are planning for upcoming events, reviewing an online content management system and creating a special Sudoku puzzle for publication.

All of the students involved work for the Orange Media Network at Oregon State University.

OMN is a thriving, national award-winning student media organization, home to a newspaper, three magazines, a television station and a radio station.

Approximately 450 college students majoring in everything from chemical engineering to business to digital communication arts find a home at OMN each year. They work as reporters, photographers, editors, graphic designers, salespersons, studio engineers, DJs and more.

“There is nothing quite like problem solving a situation while live on-air,” said Director of Orange Media Network Candace Baltz.   “The public, time-sensitive pressures of publishing and broadcasting –and engaging with an audience—develop resiliency and unparalleled critical thinking, communication and leadership skills. These experiences set our students up for success beyond the studio and newsroom.”

It’s not uncommon for OMN students to receive job offers before they ever don their mortar boards and cross the stage at commencement.

OMN Web and Mobile Manager Riley Youngman recently received his first full-time job offer, for a marketing and communications position, well before he graduates in June.

He said his work at OMN, managing a staff, developing sources and focusing on audience trends, complemented his time spent in classrooms.

“Those experiences and the lessons I’ve learned allow me to stand out among my peers in the job search process,” Youngman said.

The job offers come in recognition of the learning that takes place during each television show production or magazine staff meeting.

This experiential learning goes beyond what students can learn from textbooks and lectures. In the newsroom, classroom theory turns into hands-on managerial tasks, overcoming real-world hurdles and making leadership decisions with real financial and community consequences.

Students, still figuring out their majors and what their careers will be, often have to make difficult decisions with real-world consequences.

A student television producer pulled the plug on the live music show she produced because the guest band was under the influence.

A student advertising executive balanced two time zones to sell ads to customers in Corvallis while studying abroad a world away in Malaysia—all while meeting deadlines and quota.

The hundreds of hours of work build resumes and skill sets, and often merit recognition from well beyond the confines of the OSU campus.

“We do not have a journalism school at OSU, our students are all majoring in other subjects, but in these contests they compete against students from some of the most well-known Journalism schools in the country,” said Baltz. “So it is eminently rewarding when the quality of our students’ work earns national recognition.”

Most recent honors include the 2017 Associated Collegiate Press Pacemaker awarded to The Daily Barometer. The coveted award, often called the Pulitzer Prize of college journalism, recognizes the best in college media in the United States.

The judges noted the paper’s “consistently strong mix of in-depth coverage and daily reporting.” It was the first time Oregon State University has earned a Pacemaker.

Current Baro Editor-in-Chief Lauren Sluss, a political science major, said the awards and honors recognize the work the staff has done and continues to do.

“Receiving an award helps our team stay motivated and realize that the work that we do is not only having an impact on a local scale, but is being recognized in the greater community by professionals,” Sluss said.

That recognition, she said, “is reassurance that the work we do is important and has the power to reach many individual people.”

In addition to the Pacemaker, The Barometer was named the Best All-Around Non-Daily Newspaper in the northwest by the Society of Professional Journalists in the Region 10 Mark of Excellence competition.

DAMchic, meanwhile, was named a finalist in the Best Student Magazine category of the Society of Professional Journalists Region 10 Mark of Excellence competition.

The business students who sell advertising and develop events, and the marketing plans to accompany them, also earn national recognition for their efforts.

Markie Belcher, OMN’s longest-serving employee, said she has watched the organization change over the two decades she’s been there.

“The students are getting more training and direction, and are being better prepared for life after college,” Belcher said.

There are no minimum qualifications for getting involved with OMN. Any student interested in learning and practicing media skills can join by filling out a short form: https://oregonstate.qualtrics.com/jfe/form/SV_0ihzhqhTCWW0rfD