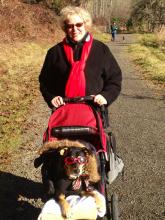 In a medical hospital, members of clergy serve as chaplains to comfort the family and friends of patients suffering serious illness or injury.

Veterinary chaplains are still a rarity nationwide, though many animal hospitals have some form of support staff who work with clients in distress. The hospital at OSU’s Carlson College of Veterinary Medicine also has a comfort room, with plenty of floor space so people can lie down near their pets.

As a certified veterinary chaplain, Windsor-White provides a soothing presence to clients whose pets are facing difficult diagnoses or euthanasia, and helps them navigate the hospital system when emotions make it hard to think clearly.

“A lot of society says you shouldn’t have any grief; that it is just a pet, just a dog, just a cat,” she said. “But folks who have experienced it know that it’s very real, and that a bond with an animal — you lose a number of different things when you lose a particular animal.”

“The grief itself doesn’t care what the source is; it is just there.”

A steady, serene woman, Windsor-White’s general practice is to sit quietly near clients who appear troubled in the waiting room, then introduce herself and let them know she’s there to listen if they need to talk. She gives out business cards, too; some people call months later, unsure how to move forward with grief that won’t go away.

She also works with Carlson College fourth-year students going through their oncology rotation. They meet with her at the end of their first week to discuss what worked well with clients and what didn’t.

The timing is very intentional, said Dr. Haley Leeper, a veterinary oncologist and assistant professor: They don’t want students to carry unexplored grief into the weekend.

“It’s so they can talk about anything emotional related to this two-week oncology rotation, and make sure that part is also being addressed, along with the science,” Leeper said.

So far, oncology is the only department to bring in Windsor-White as part of the curriculum.

“It’s a unique thing,” Leeper said. “A large part of our job is client counseling and client communication.

So our students are being exposed to that, which is why I think it’s great to have Renee as an additional resource: someone who’s not in the veterinary field giving their take on how to deal with those situations.”

After working 14 years as a pastor, Windsor-White started out as a volunteer at OSU in 2014, but was hired on a contract basis in early 2019. Now she works Monday and Friday afternoons, making herself available to anyone who might need her in the hospital waiting room. She also holds grief support groups for pet owners outside of OSU during the week.

Lori Feinman, a client who has since become a friend, tried going to a regular support group when she lost her dog several years ago. She didn’t tell anyone she was there for a pet; she just talked about her loss.

“Even though the person who was leading the group was very willing to have me there and really wanted to be sure I was comfortable, I wasn’t comfortable sharing with other people who had lost fathers, mothers, spouses,” Feinman said.

But with Windsor-White’s support group, “You could go into a room with someone else who knew what your history was, and already validated it, so that you didn’t have to feel as if you had to be quiet and careful about what you said,” she said. “You could truly know that they were honoring what you’d experienced.”

She met Windsor-White during the chaplain’s first year of volunteering at the veterinary hospital, when Feinman was there with her rescue dog Addie, who had a large growth in her chest cavity that was making it nearly impossible to breathe. Veterinarians in her hometown of Eugene were unable to do the surgery she needed, so she came up to OSU hoping the hospital could help.

“I had been there the entire day, and I was in a lot of fear and really alone, and pretty shaken by the whole experience,” Feinman remembers, recounting the many weeks of hearing Addie’s labored breathing and seeing how scared the dog was, too.

In her haze of anxiety, she barely registered Windsor-White when she sat down nearby. When Windsor-White started talking, Feinman assumed hospital staff had sent her over, but she said no; she was just there for people.

“It was tremendous to have an advocate all of a sudden, when you’re in that situation,” Feinman said. “Having somebody there just to witness what was going on, to double-check your thinking because you’re so anxious, was remarkable.”

(photo depicts Lori Feinman of Eugene and her rescue dog Addie, am Australian kelpie, on a hiking trail)