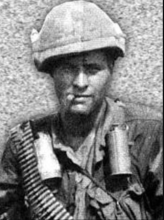 An Oregon State University student and Congressional Medal of Honor recipient who was killed in the Vietnam War was honored by the Oregon Legislature during the 2022 session.

Sgt. John Nobel Holcomb, who was from Richland, Oregon, was attending Oregon State University in the mid 1960s when he was called up. While serving with the Company D, 2nd Battalion, 7th Cavalry, 1st Cavalry Division he was killed in Phuoc Long, Vietnam on Dec. 3, 1968.

Representative Mark Owens (R-Crane) sponsored bill HCR 204 recognizing Holcomb’s service. This was the first step in potentially naming a section of Highway 86, which runs through Richland, as a Fallen Hero Memorial Highway in his honor.

His valor and sacrifice on behalf of his comrades and his country were recognized with a Purple Heart, Army Commendation Medal with “V” Device, Bronze Star Medal with Oak Leaf Cluster, and Air Medal with Oak Leaf Cluster in addition to the Medal of Honor. As a token of his memory, he is honored in the Baker City Armory entry hall, at a monument near Richland, and in the naming of Holcomb Barracks at Fort Benning, Georgia.

Below is a description of his service as part of his Medal of Honor citation:

Sgt. Holcomb distinguished himself while serving as a squad leader in Company D during a combat assault mission. Holcomb's company assault had landed by helicopter and deployed into a hasty defensive position to organize for a reconnaissance-in-force mission when it was attacked from 3 sides by an estimated battalion-size enemy force. Holcomb's squad was directly in the path of the main enemy attack. With complete disregard for the heavy fire, Sgt. Holcomb moved among his men giving encouragement and directing fire on the assaulting enemy.

When his machine gunner was knocked out, Holcomb seized the weapon, ran to a forward edge of the position and placed withering fire on the enemy. These actions caused the enemy to withdraw. Holcomb treated and carried his wounded to a position of safety and reorganized his defensive sector despite a raging grass fire ignited by the incoming enemy mortar and rocket rounds. When the enemy assaulted the position a second time, Holcomb again manned the forward machine gun, devastating the enemy attack and forcing the enemy to again break contact and withdraw. During the enemy withdrawal an enemy rocket hit Sgt. Holcomb's position, destroying his machine gun and severely wounding him.

Despite his painful wounds, Sgt. Holcomb crawled through the grass fire and exploding mortar and rocket rounds to move the members of his squad, everyone of whom had been wounded, to more secure positions. Holcomb as the last surviving leader of his platoon organized his men to repel the enemy, crawled to the platoon radio and reported the third enemy assault on his position. His report brought friendly supporting fires on the charging enemy and broke the enemy attack, but his wounds were fatal.