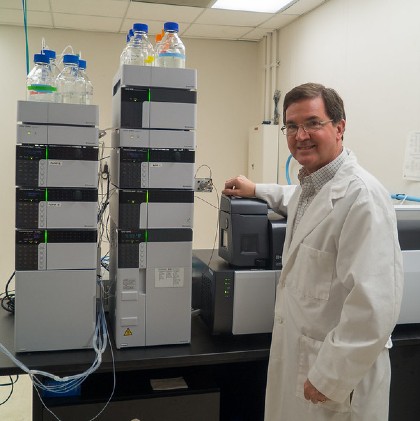 Richard van Breemen of the Linus Pauling Institute and the Department of Pharmaceutical Sciences in the Oregon State University College of Pharmacy has been named one of the world’s most influential analytical scientists by The Analytical Scientist magazine.

Van Breemen, an expert in biomedical mass spectrometry with a focus on natural products, researches the discovery of drugs from botanicals and investigates the safety and efficacy of botanical dietary supplements.

He has published more than 370 scientific papers and has mentored nearly 100 graduate students and postdoctoral fellows. Along with co-principal investigator Taifo Mahmud, van Breemen directs a training grant from the National Institutes of Health that supports the predoctoral education of the next generation of experts in natural products for human health.

Van Breemen serves on an expert committee for U.S. Pharmacopeia, commonly known as USP, which sets quality standards for drugs and supplements.

He is also on the editorial boards of the Journal of AOAC International (formerly the Journal of Association of Official Agricultural Chemists) and Assay Drug Development Technologies.