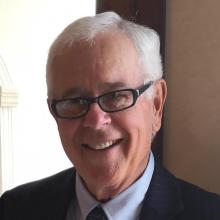 Frank Ragulsky, who directed student media at Oregon State University for several decades, died at his home in Corvallis on June 30. He was 75.

In 1982, after a decade teaching journalism across the nation, Ragulsky was selected to be the OSU’s director of student media. Upon graduation, Ragulsky’s students landed media jobs all over the country and the world. He retired from OSU in 2009 after 27 years.

Throughout the years, Ragulsky stayed connected to many of his students through social media. Former Daily Barometer editor Lauren Dillard (Class of 2009), is now a lead product designer for MassMutual. She fondly recalled the impact Ragulsky had on student journalists.

“In the season of life that we knew him, Frank Ragulsky was a quiet, confident and kind man who worked every day to make sure all of Oregon State University student media had what it needed to succeed,” Dillard said. “And success, to Frank, was students learning the craft of journalism by practicing it. He worked especially hard for students who had less and who didn't look like everyone else. It's no small thing to say that I would not be where I am today if it weren't for Frank.”

DeAnn Welker (Class of 2001) worked closely with Ragulsky, first as a student journalist, and later when they both worked at Hewlett-Packard.

“As a mentor to me for over two decades, Frank was the right mix of supportive and hands-off. He respected others' opinions, even when he had many more years of experience than them,” Welker recalled. “He would gladly share his wisdom and opinions, but never said, ‘This is how you should do it!’ He wanted to hear your opinion and would then coach from there to not just bring out the best in people, but to help them learn to bring out the best in themselves.

“He shaped the paths of so many of our lives and careers, and he might not have even realized the extent of his influence,” she said. “He was brilliant, humble, and a supportive presence when you needed it.”

Ragulsky’s journalism teaching career began in 1969 when he  began teaching journalism at St. Bonaventure University in Olean, New York. In 1972  joined Oklahoma State University, where he earned his doctorate, taught journalism, and was the associate publisher for news at the Daily O'Collegian student newspaper. In 1975, he was hired as the director of student print and broadcast media at Southern Methodist University in Dallas, Texas. His next position was at Oregon State.

Ragulsky was born to Frank and Helen Ragulsky (Gorshe), on Oct. 25, 1946, in Pueblo, Colorado. He married Jane Webb in 1969, after the two met in a college biology class. They had two children, Chrissy and Tim, and five grandchildren. Ragulsky is also survived by his brothers Ron, Tom and Joe, and sisters Mary, Jeannie and Phyllis. He was preceded in death by his parents and brother Robert.

A memorial mass was held in early July at St. Mary's Catholic Church in Corvallis. Burial will take place in Homer, Alaska, overlooking Kachemak Bay, when the salmon are running, a tribute to his love of fishing and the outdoors.