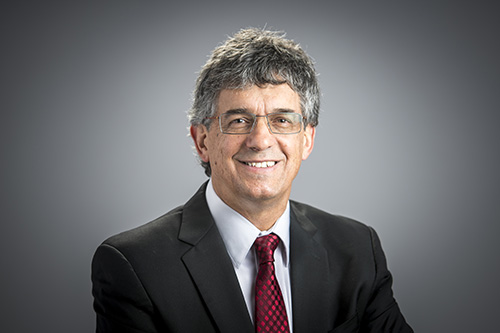 Greg Herman, a professor of chemical engineering and an expert in surface chemistry, has been appointed head of the School of Chemical, Biological, and Environmental Engineering (CBEE) at Oregon State University. Herman has also been named the James and Shirley Kuse Chair in Chemical Engineering.

Herman joined the faculty in 2009 as an associate professor and was promoted to professor in 2015. He brings a remarkable breadth and depth of experience that spans academia, industry, and governmental laboratories, including Sharp Laboratories of America, HP, Pacific Northwest National Laboratory, and the U.S. Naval Research Laboratory.

“I take great pride in our collective success and am excited about the energy and innovation that Greg will bring to our community in his new role,” said Scott Ashford, Kearney Professor and dean of Oregon State’s College of Engineering. “I look forward to seeing the continued growth in excellence and reputation of CBEE under his leadership.”

Herman has expressed great enthusiasm for the opportunity to lead CBEE’s dedicated faculty and staff. He is especially looking forward to advancing the school’s upward trajectory in undergraduate and graduate student success, research, and scholarship. In his new appointment, Herman will manage the school’s academic program, which serves nearly 1,000 undergraduate and more than 100 graduate students, and oversee a unit with 61 faculty and staff.

“The combination of chemical, biological, and environmental engineering within the same unit gives us a unique competitive advantage, and I am excited about the many collaborative and impactful opportunities that will propel our reputation,” Herman said.

Herman is an internationally renowned researcher in the interdisciplinary areas of oxide-based semiconductors development for thin-film transistor applications, including flexible electronics and displays. He has extended the application of these materials to transparent field-effect sensors for glucose monitoring. He has published more than 115 peer-reviewed scientific papers and holds 67 U.S. patents. He is a fellow of the American Vacuum Society.

As the Oregon State site director of the Northwest Nanotechnology Infrastructure center in partnership with the University of Washington, Herman has been instrumental in bringing new research capabilities to Oregon State, including the near-ambient pressure X-ray photoelectron spectroscopy and scanning tunneling microscopy system.