Jonathan Rich: Office manager for the School of Electrical and Computer Engineering

Margarett Burnett, a professor in the School of Electrical Engineering and Computer Science, calls office manager Jonathan Rich “our rock” for the way he’s anchored the school and the Kelley Engineering Center during the pandemic.

“He’s the one who goes in to deal with in-building tasks, including the huge job of dealing with the mail, and thereby prevents the rest of us from having to come in,” Burnett said. “He meets those who really do have to come in, and is generally just stepping above and beyond.” 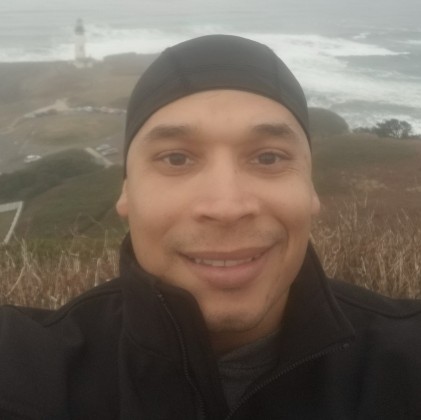 As much as anyone’s can, Rich’s background helped prepare him for helping to manage the KEC and meeting the needs of the more than 100 faculty and staff who in normal times work there.

Prior to joining the college three years ago, Rich was a 20-year Marine, serving as an administrative chief for the Corps. His last billet was with Naval ROTC on the OSU campus, where he arrived in 2013.

“My biggest challenge so far is getting used to the remote work environment,” said Rich, who like much of OSU’s workforce is now spending at least most of his time off campus. “There are certain things we’ve needed to figure out, like how the mail process would end up working. We have so many people within our school and the buildup of mail continues even though we’re not there. During a normal workday people are in and out picking theirs up, but what do we do now that they’re not?”

Ensuring that the school isn’t smothered by the postal service is just one of the roles Rich has taken on in the face of COVID-19.

“I come in a couple days a week, maintaining our access to the building and keeping close track of who’s coming into the building,” Rich said. “We’ve really locked down who’s coming in, but by the same token people need access to their space – they’re coming in and grabbing monitors and chairs because we want their home space to be as ergonomic as possible. So we’re planning those entries out so there’s no overlap of people coming in and out. We’ve asked people to stay honest and stay out of the building, and we know from our key-card management system that they’re doing that. We’re taking social distancing very seriously.”

The day of the interview for this story, Rich was one of three people working in the 153,000-square-foot building. Growing up, Rich got an early start on comparative solitude thanks to a hometown – Parkton, North Carolina – that has a population of roughly 400.

“It’s one of those towns where, when someone asks where you’re from, you name the closest city,” he said, adding that Fayetteville is the answer he typically gives. “But to see everything vacant at Kelley has been a real eye-opening experience. In addition to all of our faculty and staff, we have the E-Café here, a couple of classrooms, lots of conference rooms that people book, and a grad student population in the 200s.”

Emptiness aside – the silver lining of which is it’s been easier for maintenance staff to make headway on some requests – Rich says there have no real issues preventing the school and building from functioning during the pandemic.

“I’m continuing to do my job, just like everyone else, just doing my part,” he said. “I think the flow of information has been really good. The college is pushing information down and we’re trying our best to relay it to faculty and staff – communication is a very critical piece when you’re going through something like this. We’re doing our part as part of the OSU community, and everyone doing their part is how we’re going to get through everything.”