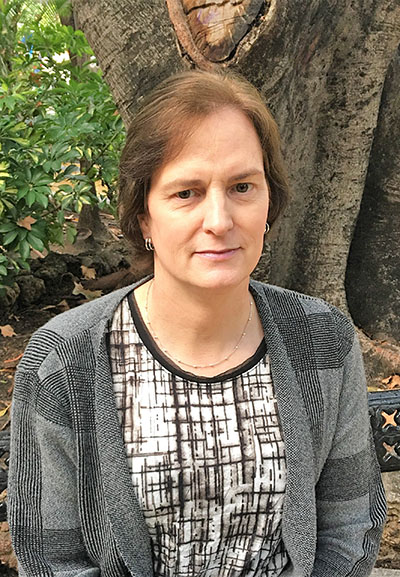 Robyn Leigh Tanguay is an internationally recognized scholar whose work on zebrafish models has advanced the world’s understanding of how chemicals impact the biological development of humans. In 2011, she was named an Oregon State University Distinguished Professor, the university’s highest honor. And she is invited regularly to speak to regulators and private companies about biosafety in commercial development. But until this December, Tanguay’s colleagues knew her as Robert, a name and a gender identity that she says never truly fit. Now, she's announcing her transition to her department and making it official.

Born in 1966 in Menominee, Michigan, Tanguay began feeling a little different than her brothers and sisters fairly early on. She recalls being around 4 or 5 years old, and realizing she had a much stronger kinship to her sisters and female friends than to her brothers.

“I was a scrappy, kind, sensitive, and intensely empathetic child at an early age,” Tanguay said. “I know my mom noticed I was different from her sons, but probably just thought I was a good kid that liked to cook.”

Tanguay instinctively realized that whatever she was feeling, it was not something she could safely share with others. She became increasingly lonely and isolated, and depended more and more on her dog Snoopy, who she said was instrumental in getting her through the hard times, and often the only family member she felt like she could talk to.

As she reached adolescence, Tanguay compensated for feeling different by overachieving, hoping that her success could earn her admiration and make up for the fact that she was actually hiding her true self.

“People in my life were impressed, which becomes a powerful reward system that inevitably became constant expectations,” she said. “Year by year I realized that I made most of my decisions to help, or not disappoint others, and none for myself.”

In the pre-Internet era, Tanguay struggled to figure out just what was making her feel different. By her teen years, she had realized that she was trans, but viewed the realization not as a relief, but simply as a name to her ‘problem.’ It was necessary to her survival to hide how she felt, and she normalized the pain by telling herself that other people had bigger problems. Her future appeared at that time as a long road of suffering and hiding.

But then in her early 20s, Tanguay began finding and reading books about the trans experience, and even better, meeting other trans people who could validate her journey.

“I cannot describe how much better I felt. Meeting others who can understand and accept you as you are without judgment is powerful,” she said.

By the time Tanguay was ready to share her identity with those around her, she was already married with a daughter. Telling them was one of the hardest experiences of her life, but she was rewarded with acceptance and understanding, which hugely changed her views of her future and her ability to truly be who she was. But still, the road to full disclosure was a long one.

“I still assumed I could never transition as it would disappoint others or jeopardize my career. In some ways, this was even a more difficult period of my life,” she said.  “I now knew what I should and what I could do for myself, but my sense of responsibility and commitment to others told me I simply could not take the risk or to be so ‘selfish.’ It was awful.”

But Tanguay persevered. She eventually began living fully as Robyn in her private life, but maintained her male persona in her professional life, until the tension between the two finally became too much, and she said she simply could not continue.

“Those who know me know that I value and expect honesty and respect from others, and here I was not being honest,” she said. “It seems to me that internal wholeness and happiness are critically important for all of us,” and that wholeness would only come with being true to herself in all aspects of her life. Her hope is that her professional circle can come to accept her transition to female with the same grace as her family and friends.

“I have a reputation of being somewhat fearless in my field. I take risks to make impacts. I do not want this to change,” Tanguay said. “I do not like negativity as I find it worthless and draining. I work hard to create positive work environments for the various groups I lead, and I do not want my transition to disrupt this.  I am hopeful after the shock wears off that my colleagues get used to Robyn.”

As for others in academia who are facing the same sense of tension between who they are and how the world sees them, Tanguay said it’s essential to find people to talk to and avoid the feelings of isolation that can easily overpower someone.

Tanguay said she knows that being publicly out as a trans woman may open her up to social and professional risks, but she said she’s ready to fully be herself.

“I am old enough to know and have heard, read and witnessed discriminatory comments and actions targeted to trans individuals on and off campus.  I know some will struggle to accept me as Robyn,” she said. “This will be disappointing. I do however hope my colleagues quickly accept me as the woman I am so we can all get onto matters that are more important.”