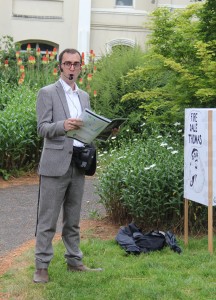 In the early 1980s, the Oregon State University African Student Association actively protested against apartheid, focusing much of their attention on OSU wrestling coach Dale Thomas, who had long standing ties with coaches in South Africa. That heated interplay between the students and the coach came to life again on a rainy June morning during the spring Social Justice Tour of Corvallis.

As the rain began to pour down on the front lawn of Benton Hall, and umbrellas and hoods simultaneously appeared, students Isamar Chavez and Alex Riccio stepped forward. Chavez read excerpts from a student letter protesting the plan of the OSU wrestling team to compete in South Africa during Apartheid, while Riccio responded in the defiant voice of Coach Thomas.

The tale of how apartheid had touched OSU was a new one for some of the participants gathered for the spring Social Justice Tour of Corvallis, but that is precisely the point. The tour, organized by Assistant Professor Natchee Barnd of the OSU department of ethnic studies and led by students of his graduate level ethnohistory course, focuses on stories connected to OSU and the surrounding community. Many of the tales brought to life during the tour are little known to the general public, but each unveiled a story of power, tension and inequity that still resonates today.

“For this set of stories, we delved directly into the tensions of power, epistemology and representation,” Barnd said of this third iteration of the social justice tour. “We also gather with our guests to move through space together as an act of solidarity and community-building. We tour. We socialize. We enact.” 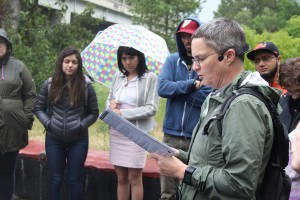 The tour included a school bus trip to several downtown Corvallis locations, including the city-sanctioned graffiti wall off Seventh and Western, the skate park and the Corvallis Multicultural Literacy Center. At each location, a different set of students took up the story telling, using first person narratives based off journals, letters and newspaper articles, as well as poetry and some fictional pieces interwoven with the archival information.

Each piece, or performance, had a different backdrop, whether it was the Willamette River or the shady lawn of Benton Hall. On the river bank, Tami Gann recited a prose plea from the river herself.

“Today, thirteen large dams lie upon me, and so many small ones I cannot count. I am bound and shackled, constrained, held captive to this single, deep channel you see here. To be confined in this way is foreign to me, all I have ever known is braided movements and though parts of me would linger in the wetlands, I always flowed back to myself.” 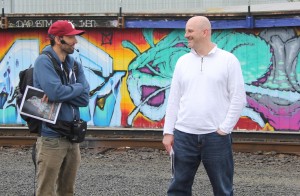 Barnd said it was important to weave the voices of real Willamette Valley residents with pieces of fiction to create a richer story.

“We consciously played with the fuzzy boundaries between history and fiction. We creatively adjusted for gaps in the archives, and re-framed clear biases and inaccuracies where we found them,” he told the tour group. “We also sought out new approaches, new stories or unique angles on older stories, to help differentiate this version of the tour from the previous one.”

While some stories were serious, and even emotional, a few were comical, as when Elena Ramirez donned a tinfoil hat to relate the story of a UFO sighting in Corvallis. But each one drew a strong connection between the area’s past and its dynamic, equally challenging present.

“It is not enough to simply tell the University to wake up;” student Isamar Chavez said at the end of the tour, reading from a 1969 letter from ASOSU president John Fraser. “It will be necessary to keep shaking it occasionally to get on its feet. This is the role of the student, to keep Campus from going back to sleep.”