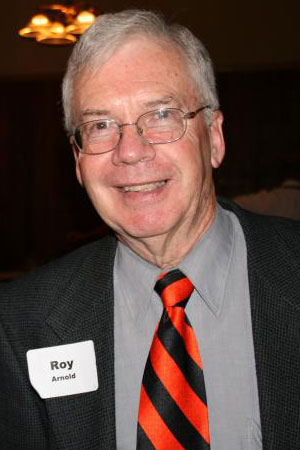 Throughout his career in higher education at Oregon State University and at the University of Nebraska-Lincoln, Arnold was a committed educator of people who were inspired by what was possible in agriculture nationally and throughout the world. As a university administrator at Nebraska and at OSU, he was a leader, problem solver and a person who never was afraid of a challenge.

Arnold earned his master’s and doctorate degrees from Oregon State, having earned his bachelor’s degree from Nebraska. After 20 years working at Nebraska in varied positions, he was named dean of OSU’s College of Agricultural Sciences in 1987 and then provost and executive vice President in 1991. During his tenure as provost, Arnold helped OSU navigate significant budget reductions prompted by voters’ adoption of property tax limitations that resulted in reduced state support for higher education.

While provost, Arnold helped launch OSU’s Honors College, Ethnic Studies Department, and the university’s dual admissions and enrollment programs with Oregon’s many community colleges. In 2000, Arnold returned to the College of Agricultural Sciences as executive associate dean, and later helped lead OSU-Cascades in Bend for a time.

Over the past five years, Arnold was instrumental in helping to plan OSU150 – the celebration of Oregon State University’s 150th anniversary. Arnold made sure that OSU150 not only celebrated the past, but provided a spotlight on OSU’s contributions as one of the nation’s only two land, space, sea and sun grant universities. And he emphasized that OSU150 also imagined what the university might become in its next 150 years.

For more about Arnold’s life and meaningful contributions while at OSU, visit his oral history recollections that were recorded as part of more than 200 oral history interviews conducted during OSU150.

Arnold is survived by his wife, Jane, his daughters, Jana Hoffman of Portland and Julie Salvi of Olympia, WA. and two grandchildren.