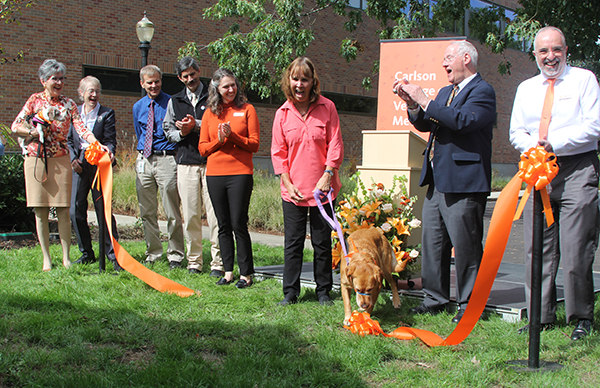 A little wind and some peanut butter helped move things along during a ribbon ‘chewing’ ceremony on Sept. 23 at the Carlson College of Veterinary Medicine to celebrate the expansion of the veterinary teaching and clinical facilities.

The 21,729-square-foot expansion of Magruder Hall, the home of the university’s veterinary school, includes additional instruction space and will allow for increased services at the small animal hospital.

The event included several speeches by some of the vet school’s biggest supporters and champions, attended by a crowd of around 200 people and three very patient llamas. Lois Bates Acheson Dean Susan J. Tornquist and her dog, Cassie, were in charge of the chewing portion of the ceremony, although the wind split the ribbon several times before Cassie was able to do her job and pull apart the peanut-butter coated ends of the orange ribbon and officially open the new expansion.

Later, the crowds split into smaller groups to tour the new expansion, which includes a new wing for the Lois Bates Acheson Teaching Hospital and a remodeled entrance and reception area for the small animal hospital. The new wing includes six exam rooms, more than doubling the current exam space, and offices for hospital doctors and residents. The new wing will house oncology, cardiology, and internal medicine, freeing up space for the surgery service to expand. The expanded reception area also includes triage and comfort rooms.

The small animal hospital has treated more than 20,000 animals, primarily cats and dogs, since its opening in 2006. Over the past five years, the hospital’s case load has increased an average of 9.1 percent annually.

“We’re ecstatic to open these new educational and clinical spaces,” said Dr. Katherine Scollan, the college’s associate dean for students and academic affairs. “The completed expansion will increase patient and client comfort and care, while also enhancing the educational experiences of the veterinary students.”

The expansion includes a new wing at the south end of the Magruder complex, with a 100-seat lecture hall, a conference room, a student lounge area and the Coffee Corral, a new coffee shop. The lecture hall will help serve the growing veterinary student population; enrollment was increased from 56 students to 72 students per class over the last few years.

In addition to the new facilities, the parking lot for clients of the small animal hospital has been improved and expanded.

The Magruder Hall expansion is supported by a $5 million gift from Gary R. Carlson through the Oregon State University Foundation - a portion of his historic $50 million commitment to the college announced in 2018. Additional funding for the project was provided by earnings from the Lois Bates Acheson Endowment.