CORVALLIS, Ore. – Cassie the robot, invented at Oregon State University and produced by OSU spinout company Agility Robotics, has made history by traversing 5 kilometers, completing the route in just over 53 minutes.

Cassie was developed under the direction of robotics professor Jonathan Hurst with a 16-month, $1 million grant from the Defense Advanced Research Projects Agency, or DARPA.

Since Cassie’s introduction in 2017, in collaboration with artificial intelligence professor Alan Fern OSU students funded by the National Science Foundation and the DARPA Machine Common Sense program have been exploring machine learning options for the robot.

Cassie, the first bipedal robot to use machine learning to control a running gait on outdoor terrain, completed the 5K on Oregon State’s campus untethered and on a single battery charge.

Cassie, with knees that bend like an ostrich’s, taught itself to run with what’s known as a deep reinforcement learning algorithm. Running requires dynamic balancing – the ability to maintain balance while switching positions or otherwise being in motion – and Cassie has learned to make infinite subtle adjustments to stay upright while moving.

“Cassie is a very efficient robot because of how it has been designed and built, and we were really able to reach the limits of the hardware and show what it can do,” said Jeremy Dao, a Ph.D. student in the Dynamic Robotics Laboratory.

“Deep reinforcement learning is a powerful method in AI that opens up skills like running, skipping and walking up and down stairs,” added Yesh Godse, an undergraduate in the lab.

Hurst said walking robots will one day be a common sight – much like the automobile, and with a similar impact. The limiting factor has been the science and understanding of legged locomotion, but research at Oregon State has enabled multiple breakthroughs.

“In the not very distant future, everyone will see and interact with robots in many places in their everyday lives, robots that work alongside us and improve our quality of life,” Hurst said.

In addition to logistics work like package delivery, bipedal robots eventually will have the intelligence and safety capabilities to help people in their own homes, Hurst said.

During the 5K, Cassie’s total time of 53 minutes, 3 seconds included about 6 1/2 minutes of resets following two falls: one because of an overheated computer, the other because the robot was asked to execute a turn at too high a speed.

In a related project, Cassie has become adept at walking up and down stairs. Hurst and colleagues were tapped to present a paper on that at the Robotics: Science and Systems conference July 12-16. 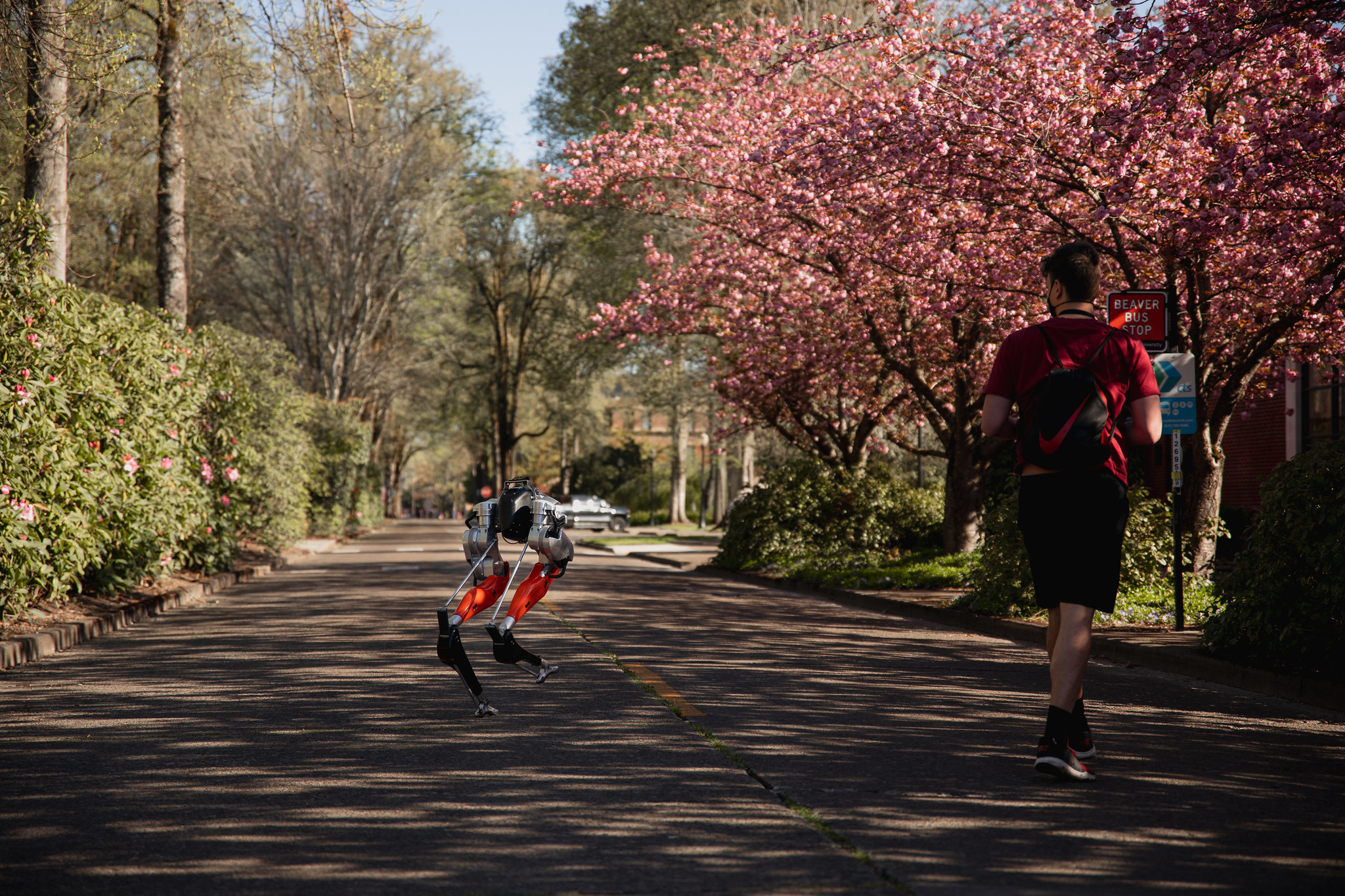