CORVALLIS, Ore. – Researchers at Oregon State University are looking at a highly durable organic pigment, used by humans in artwork for hundreds of years, as a promising possibility as a semiconductor material.

Findings suggest it could become a sustainable, low-cost, easily fabricated alternative to silicon in electronic or optoelectronic applications where the high-performance capabilities of silicon aren’t required.

Optoelectronics is technology working with the combined use of light and electronics, such as solar cells, and the pigment being studied is xylindein.

“Xylindein is pretty, but can it also be useful? How much can we squeeze out of it?” said Oregon State University physicist Oksana Ostroverkhova. “It functions as an electronic material but not a great one, but there’s optimism we can make it better.”

Xylindien is secreted by two wood-eating fungi in the Chlorociboria genus. Any wood that’s infected by the fungi is stained a blue-green color, and artisans have prized xylindein-affected wood for centuries.

The pigment is so stable that decorative products made half a millennium ago still exhibit its distinctive hue. It holds up against prolonged exposure to heat, ultraviolet light and electrical stress.

“If we can learn the secret for why those fungi-produced pigments are so stable, we could solve a problem that exists with organic electronics,” Ostroverkhova said. “Also, many organic electronic materials are too expensive to produce, so we’re looking to do something inexpensively in an ecologically friendly way that’s good for the economy.”

“There’s a lot of performance variation,” she said. “You can tinker with it in the lab, but you can’t really make a technologically relevant device out of it on a large scale. But we found a way to make it more easily processed and to get a decent film quality.”

Ostroverkhova and collaborators in OSU’s colleges of Science and Forestry blended xylindein with a transparent, non-conductive polymer, poly(methyl methacrylate), abbreviated to PMMA and sometimes known as acrylic glass. They drop-cast solutions both of pristine xylindein and a xlyindein-PMMA blend onto electrodes on a glass substrate for testing.

They found the non-conducting polymer greatly improved the film structure without a detrimental effect on xylindein’s electrical properties. And the blended films actually showed better photosensitivity.

“Exactly why that happened, and its potential value in solar cells, is something we’ll be investigating in future research,” Ostroverkhova said. “We’ll also look into replacing the polymer with a natural product – something sustainable made from cellulose. We could grow the pigment from the cellulose and be able to make a device that’s all ready to go.

“Xylindein will never beat silicon, but for many applications, it doesn’t need to beat silicon,” she said. “It could work well for depositing onto large, flexible substrates, like for making wearable electronics.”

This research, whose findings were recently published in MRS Advances, represents the first use of a fungus-produced material in a thin-film electrical device.

“And there are a lot more of the materials,” Ostroverkhova said. “This is just first one we’ve explored. It could be the beginning of a whole new class of organic electronic materials.” 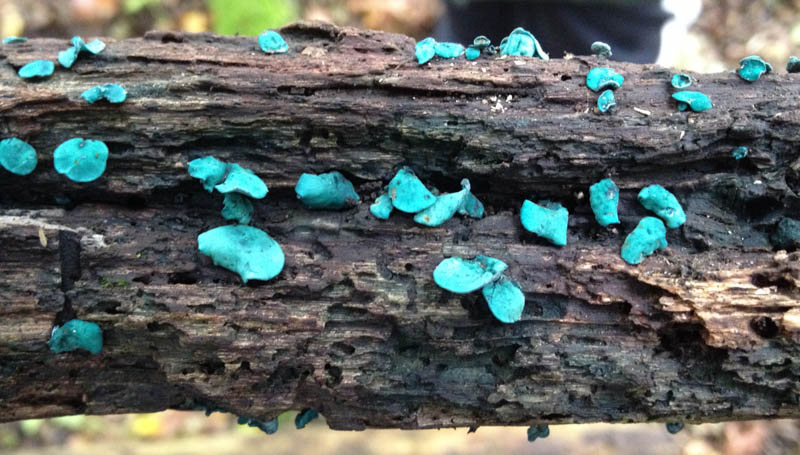