CORVALLIS, Ore. – The next generation of high-tech adhesives could take some design cues from the tongues of frogs, according to new research led by the Oregon State University College of Engineering.

Findings were published today in the journal Biointerphases.

Frogs use their highly specialized tongues to capture prey, with a force that can exceed their own body weight. This is possible, in part, because the frog’s tongue is covered with a sticky mucus that functions as a pressure-sensitive adhesive.

“This mucus is able to generate large adhesive forces in response to the high strain of retraction,” said the study’s corresponding author, Joe Baio, assistant professor of bioengineering. “The goal of this study was to determine the chemical structure of the surface of this mucus after a tongue strike, which had not been done previously.”

Recent studies of frog tongue mucus resulted in visual observation of fibrils — multiple protein chains twisted like fibers around a central axis — between the frog’s tongue and the target surface.

“This fibril formation indicates an induced change in the chemical structure of the mucus during tongue retraction,” Baio said. “And it is these fibrils that allow the mucus to generate strain-responsive adhesive forces by acting as molecular shock absorbers for the tongue.”

Collaborators at the Zoological Institute of the University of Kiel, Germany, collected mucus samples from three adult horned frogs. The scientists induced the frogs to strike glass microscopy slides by placing a slide about 2 inches in front of each frog and holding up a cricket immediately behind the slide.

Highly detailed near edge X-ray absorption fine structure microscopy images of the layers of mucus left behind on the slide were collected on the National Institute of Standards and Technology beamline at the National Synchrotron Light Source.

OSU researchers then characterized the surface chemistry of the mucus, which, they concluded, confirms the formation of fibrils in response to tongue retraction, supporting previous classifications of the frog sticky-tongue mechanism as a pressure-sensitive adhesive.

The study was supported by funding from the National Science Foundation, the U.S. Department of Energy and the Aarhus University Research Foundation.

Researchers from the University of Aarhus, Denmark, University of Kiel, Germany, and the National Institute of Standards and Technology were among the collaborators. 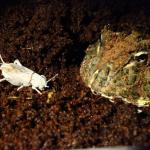 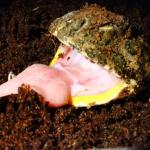 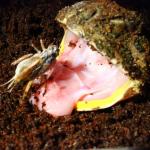