PORTLAND, Ore. – A study led by an Oregon State University pharmaceutical sciences researcher has produced a proof of principle for a new “universal” means of treating COVID-19.

Gaurav Sahay and collaborators at OSU and the Texas Biomedical Research Institute demonstrated in a mouse model that it’s possible to prompt the production of a protein that can block multiple variants of the SARS-CoV-2 virus from entering cells and causing respiratory disease.

“Rather than messenger RNA as a vaccine, this shows that mRNA can be used as a universal therapy against different coronaviruses,” Sahay said. “Despite mass vaccination, there is an urgent need to develop effective treatment options to end this pandemic. Several therapies have shown some effectiveness, but the virus’ high mutation rate complicates the development of drugs that treat all variants of concern.”

Findings were published in Advanced Science. Next steps involve showing that the protein prevents infection in mice, said Sahay, who added that the mRNA treatment is possibly “a couple of years” away from being available to human patients.

Breathing in the virus is the primary way to contract COVID-19, blamed for 6 million deaths globally since the pandemic began in late 2019. The virus’ envelope is covered in spike proteins that bind to an enzyme produced by cells in the lungs.

Using messenger RNA packaged in lipid nanoparticles, the scientists showed in the mouse model that host cells can produce a “decoy” enzyme that binds to coronavirus spike proteins, meaning the virus shouldn’t be able to latch onto cells in the host’s airway and start the infection process.

The study, which involved messenger RNA that was administered intravenously and also through inhalation, which would be the preferred delivery method for humans, was published in Advanced Science.

“Proteins are large, complex molecules that serve as the workhorses of cells, enabling all of the biological functions within a cell,” said Sahay, an associate professor in the OSU College of Pharmacy. “DNA holds the blueprints from which proteins get made after the code is first transcribed into messenger RNA.”

An enzyme is a type of protein that acts as a catalyst for biochemical reactions. HACE2 – short for human angiotensin-converting enzyme 2 – is an enzyme of the airway cells. It is also expressed in the heart, kidney and intestine, and has a hand in numerous physiological functions.

Simply giving a COVID-19 patient hACE2 would have limited effectiveness in treating the disease, Sahay said, because the soluble form of the enzyme, the kind that can circulate throughout the body, has a short half-life – less than two hours, meaning it wouldn’t stay in a person’s system very long.

But lipid nanoparticles, often abbreviated to LNP, containing mRNA that orders production of the enzyme can help overcome that problem.

In this study, the researchers engineered synthetic mRNA to encode a soluble form of the enzyme, packaged the mRNA into lipid nanoparticles and delivered it to cells in the liver with an IV; within two hours, the enzyme was in the mice’s bloodstream, and it stayed there for days.

The scientists also delivered the loaded LNP via inhalation, prompting epithelial cells in the lungs to secrete soluble hACE2.

“The soluble enzyme effectively inhibited live SARS-CoV-2 from infecting host cells,” said OSU postdoctoral researcher Jeonghwan Kim. “The synthesis of mRNA is fast, affordable and scalable, and LNP-delivered mRNA can be repeated as necessary to sustain protein production until the infection subsides. Once treatment stops, the no-longer-needed soluble hACE2 clears the system in a matter of days.”

In addition to Sahay, other Oregon State scientists contributing to the research were Jeonghwan Kim, Antony Jozic, Anindit Mukherjee and Dylan Nelson. The studies with the live virus were performed in collaboration with Texas Biomedical Research Institute scientists Kevin Chiem, Md Siddiqur Rahman Khan Jordi B. Torrelles, and Luis Martinez-Sobrido 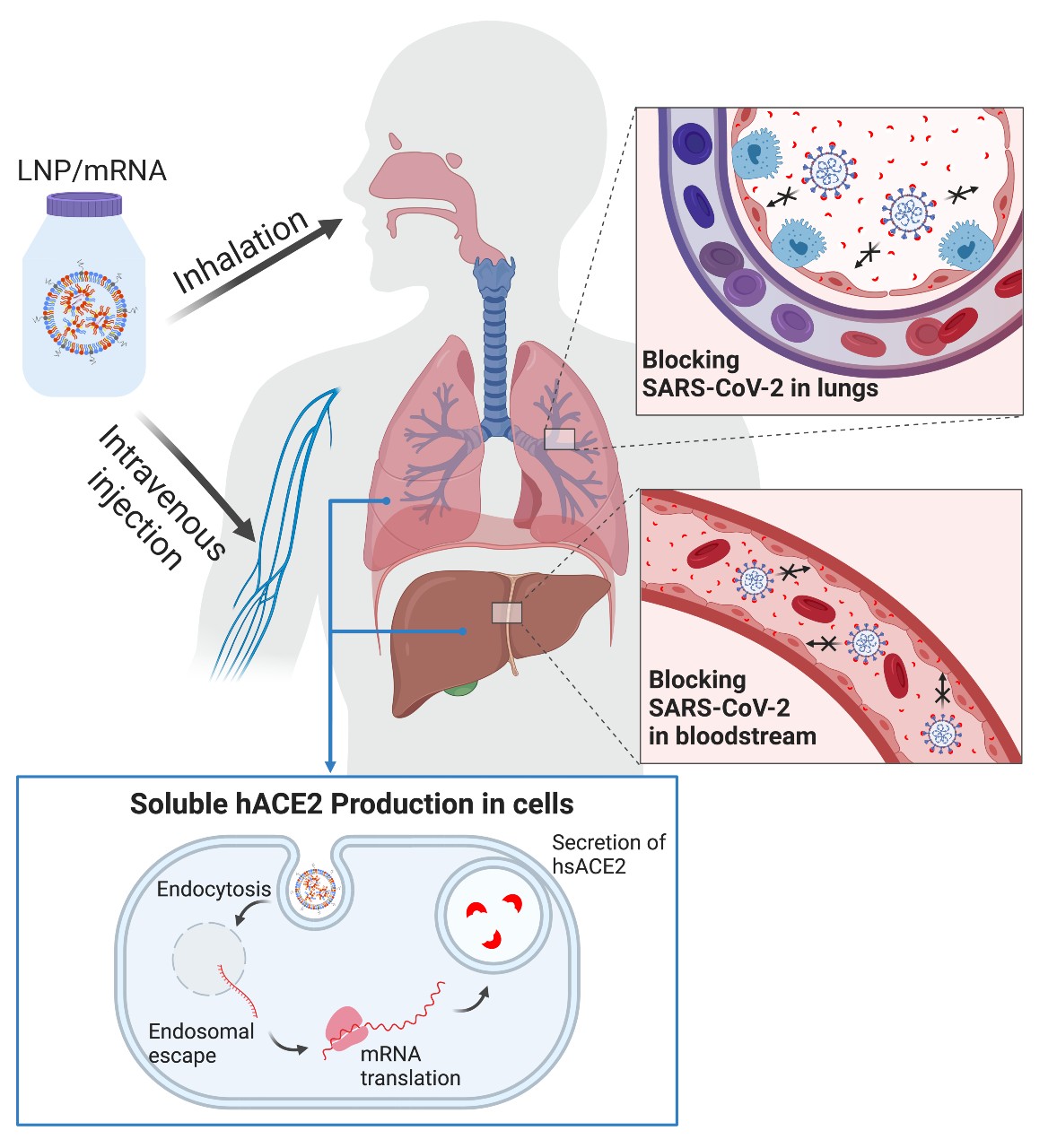