CORVALLIS, Ore. – Researchers at Oregon State have created a method called GenderMag that enables IT professionals to identify and eliminate gender biases in the software they create, configure, or purchase, to make the software more equitable.

The GenderMag research team is led by two OSU professors, Margaret Burnett and Anita Sarma, both with the College of Engineering, who have pushed OSU to lead the fight against gender bias in its own IT.

Much of the software available has built-in biases, often against women and minorities. Such biases can impact how easily users can find critical information, perform work tasks, or even navigate web sites.

The GenderMag method is based on research about the diversity of cognitive styles—how people of different genders think and solve problems. These differences are not a matter of intellect but are important in assessing how potential software users might make choices or navigate technology based on their cognitive styles. For example, when users are trying to figure out how to perform a task using software, some people tend to select the first promising option and then move forward in an incremental style, while other people tend to gather information on many options, and then make their choice.  These differences sometimes cluster by gender, but most software is optimized for only men's preferences.

Oregon State’s Information Technology unit, as well as other departments and programs on campus, are piloting the use of GenderMag. To use the method, OSU’s IT professionals choose one of the GenderMag personas, each of which represents different cognitive styles. The professionals then insert those personas into a particular process to identify "inclusivity bugs," areas where diverse cognitive styles are well not supported. When they fix these bugs, software becomes more usable by more users.

The OSU IT teams applying GenderMag to OSU websites and software are looking at everything from graphics and reports to web templates to library information kiosks. The software managed by these teams is available to more than 30,000 OSU students as well as faculty, staff and other stakeholders.

Lynn Greenough, associate director for Learning Platform Services through Information Services at Oregon State, first heard about GenderMag several months ago when Burnett did a campus presentation. Greenough said their own website was not well organized and content and resources were hard to find.

“We used the GenderMag process and tools to completely redesign our website to make it easier to navigate, and to get answers quickly to commonly-asked questions,” Greenough said. Two primary people worked on the project, and were able to make major changes to the interface through the process.

“We’re pretty sure we have reduced help desk tickets on common questions,” Greenough said. “It is a terrific practice and one that all software and web development teams should adopt.”

Margaret Mellinger’s team at Valley Library also learned about GenderMag through a presentation by Burnett. The presentation was timely, as library technology staff had recently migrated [email protected] to a new platform, and the team was looking for an assessment of the general usability of the new interface.

A team of developers and users of [email protected] went through GenderMag scenarios in two sessions to identify issues with the new platform, and discovered things like confusing wording, inconsistent use of text instructions, and confusing workflow steps.

“At first, it was a bit difficult to follow the process, but once we had the hang of it, we were able to have some very good discussions about the site and where people who are submitting publications, theses and dissertations would be confused,” Mellinger said.

The team has tackled the easier inclusivity fixes, but is still waiting to do some fixes that will require additional programming.

“Given that it takes time to do this work and that it is more complicated to do after an application is in production, we would recommend employing GenderMag in the planning stages before any programming starts,” Mellinger said.

GenderMag isn’t just for universities, Burnett said. Organizations like Microsoft have used the method to identify gender bias in their software. Fixing those biases reduces failures for women and men, which benefits everyone.

“If software isn’t a level playing field, then we’re not taking our commitment to diversity seriously,” Burnett said.

Burnett said OSU is the first university to use GenderMag to undertake a coordinated effort to remove these biases from its software. “We are staking our flag in the ground,” when it comes to leading the way in eliminating gender bias in user interfaces and workflows in academia's IT, Burnett said. “We are leading the pack.” 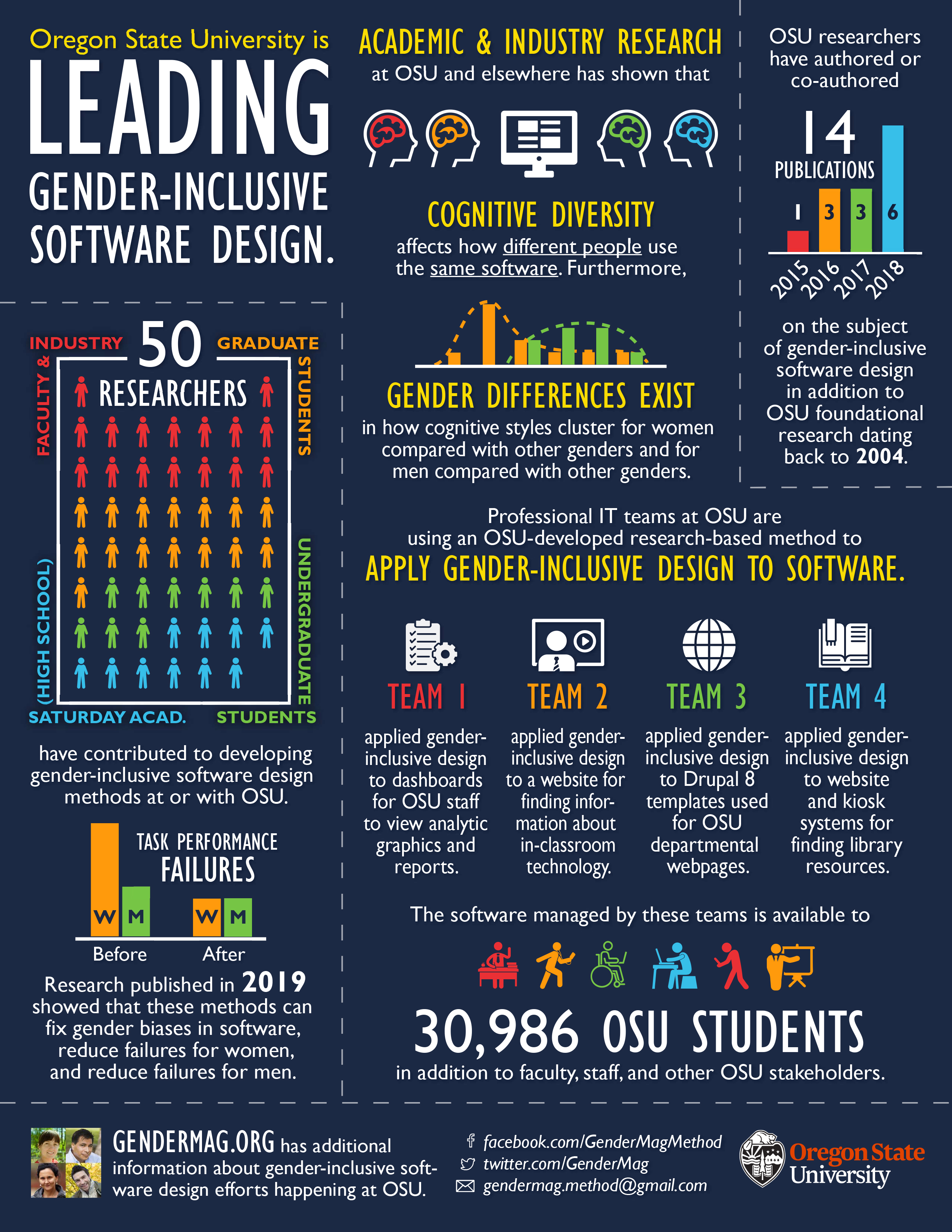