He guided Oregon State’s growth in reputation as an internationally recognized public research university; expanded access and reduced barriers to success for all students; and upheld the university’s land grant commitment to serve the people of Oregon.

“Oregonians have a real affection for Oregon State University, and for the role that OSU has played historically and continues to play in the lives of current and future generations,” Ray said. “That is a wonderful and extraordinary trust that we have to be true to. I've always had in my mind that first and foremost, we are here for Oregonians, for the Oregon economy and for moving this state and this region forward.”

Ray, currently the longest-serving public university president in Oregon, leaves office on Tuesday. F. King Alexander, a prominent national advocate for public higher education and the former president and chancellor of Louisiana State University, was selected by the OSU Board of Trustees in December to succeed Ray. Alexander begins his OSU presidency July 1.

Ray’s departure concludes the fourth longest presidency in OSU’s history, one marked by his tireless effort to develop a culture of inclusive excellence that has become a foundation for success in teaching, research, and community outreach and engagement. Among Ray’s accomplishments:

During his tenure, Ray has prioritized student success and worked to reduce barriers to higher education for historically underrepresented populations. This year, OSU’s Student Success Initiative surpassed its $150 million fundraising goal to support student scholarships, fellowships and experiential learning such as internships and study abroad opportunities.

The initiative, launched in 2016 by the university, aims to increase first-year student retention and six-year graduation rates and help alleviate financial burdens faced by students and their families. Since the initiative launched, the university’s six-year graduation rate has increased from 63.3% in 2016 to 67.1% in 2019. First-year student retention has also increased from 83.4% in 2015 to 85.4% in 2018.

His commitment to advancing diversity, equity and inclusion led to the creation of Oregon State’s first chief diversity officer position in 2016 and establishment of the offices of Institutional Diversity and Equal Opportunity and Access in 2017. The university’s diversity efforts were recognized in 2018 and 2019 with the Higher Education Excellence in Diversity (HEED) Award from INSIGHT Into Diversity magazine. The award recognizes colleges and universities that weave diversity and inclusion into their campus cultures.

Oregon State’s Corvallis campus has undergone a significant physical transformation during Ray’s tenure, with major renovation or new construction of dozens of teaching, research, student services and athletics facilities. Among the new facilities: the Linus Pauling Science Center; the INTO OSU Living Learning Center; Austin Hall, home to the College of Business; the Student Experience Center; and Johnson Hall, a College of Engineering teaching and research facility.

Four of the university’s cultural centers also received new homes, with the construction and opening of the Lonnie B. Harris Black Cultural Center, the Native American Longhouse Eena Haws, the Cesar Chavez Centro Cultural and the Asian & Pacific Cultural Center. The Beth Ray Center for Academic Support, which opened in 2012, was renamed in 2014 in honor of Ray’s wife, Beth, who later passed away following a battle with cancer.

In 2018, the university opened the OSU Portland Center in the historic Meier & Frank building downtown. Other Portland-based Oregon State initiatives include the Food Innovation Center in the Pearl District; and the launch of College of Pharmacy’s teaching and research facilities in the Collaborative Life Sciences Building in the South Waterfront district.

On the Oregon Coast, a 72,000 square-foot global marine studies research and education facility is set to open later this summer at OSU's Hatfield Marine Science Center in Newport. The Marine Studies building, a cornerstone of the university’s Marine Studies Initiative, will further advance coastal research and teaching of marine science.

Ray came to OSU from Ohio State University, where he served as executive vice president and provost beginning in 1998. He was a member of the economics faculty at Ohio State for more than 30 years. He received his bachelor’s degree in mathematics from Queens College (CUNY) in 1966, and a master’s and Ph.D. in economics from Stanford University in 1969 and 1971, respectively.

After leaving office, Ray will become president emeritus at Oregon State. He plans to take a sabbatical before returning to the faculty as a professor of economics in the College of Liberal Arts. 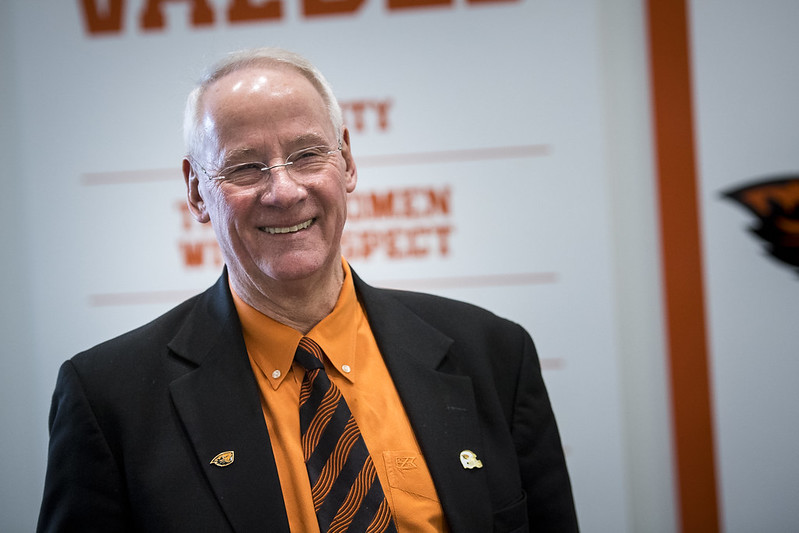