K-9 Arlo has amassed more than 642,000 TikTok followers in just over a year on the job.

“It’s a miracle that Arlo’s still alive,” said Dr. Jen Warnock, the orthopedic veterinary surgeon who repaired the bone damage to Arlo’s vertebrae. “The C6 vertebra was shattered; the bullet missed an artery that would’ve killed him by a millimeter; it could’ve destroyed his carotid artery.

“He’s unlucky but lucky at the same time.”

Prior to his arrival in Corvallis, Arlo had received surgery at Newaukum Valley Veterinary Services in Chehalis, Washington, where he was rushed immediately after Wednesday’s shooting. There, Dr. Brandy Fay treated the through-and-through bullet wound to Arlo’s leg, but the second bullet remained lodged near his spine, so she referred him to OSU. An off-duty firefighter with the Lacey Fire Department volunteered to drive Arlo down in the fire truck Thursday afternoon.

At OSU, doctors found that the bullet had tracked all the way through Arlo’s shoulder, taking a chip off his shoulder joint before landing in his neck. The bullet mushroomed inside his body and dragged hair, dirt and debris deep into the tissue, which required extensive and careful cleaning to minimize the risk of infection.

The team fused his C6 and C7 vertebrae with six screws and surgical cement.

The 3-year-old German shepherd is the newest member of the K-9 unit, receiving his certification to serve at the end of 2019, but he’s already amassed legions of fans through the TikTok account run by his handler, Dep. Tyler Turpin.

“He’s an amazing dog. He’s just so enthusiastic and he’s one of our most vocal, energetic dogs that we’ve got — he just is always happy, wants to please, just an amazing animal. Super easy to train,” said Thurston County Sheriff’s Office K-9 unit supervisor Sgt. Rod Ditrich. “He lives for the job — that’s all he wants to do is please Deputy Turpin and perform the job of a police K-9.”

Arlo’s doctors said they planned to keep him in the hospital ICU over the weekend to monitor him and that he still has a long recovery ahead of him.

“The shoulder that had all the bullet damage is the weakest,” Warnock said. “He’s still weak, but he’s improving by leaps and bounds.”

Because of the damage to his neck and shoulders, Arlo will likely have arthritis, which could compromise his reaction time and safety in the field, so he will not be returning to active duty.

When Thurston County K-9 dogs retire, their handlers are given the first opportunity to purchase them and keep them as pets.

The K-9 unit at Thurston County is paid for entirely through community donations. A GoFundMe page has been created to pay for Arlo’s medical bills. 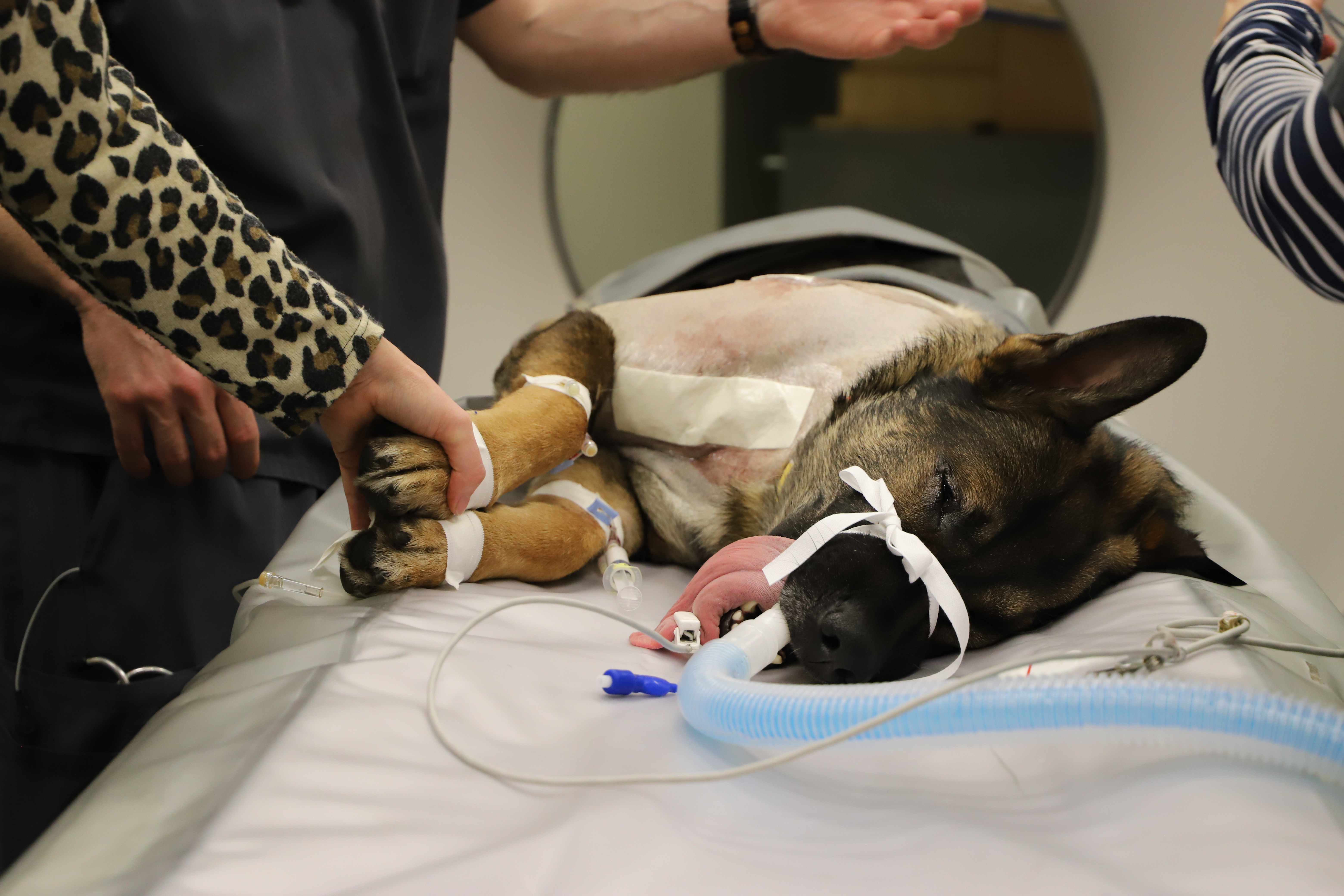