CORVALLIS, Ore. – Cassie the robot, invented at the Oregon State University College of Engineering and produced by OSU spinout company Agility Robotics, has established a Guinness World Record for the fastest 100 meters by a bipedal robot.

Cassie clocked the historic time of 24.73 seconds at OSU’s Whyte Track and Field Center, starting from a standing position and returning to that position after the sprint, with no falls.

The 100-meter record builds on earlier achievements by the robot, including traversing 5 kilometers in 2021 in just over 53 minutes. Cassie, the first bipedal robot to use machine learning to control a running gait on outdoor terrain, completed the 5K on Oregon State’s campus untethered and on a single battery charge.

Cassie was developed under the direction of Oregon State robotics professor Jonathan Hurst with a 16-month, $1 million grant from the Defense Advanced Research Projects Agency, or DARPA.

The robot has knees that bend like an ostrich’s and operates with no cameras or external sensors, essentially as if blind.

“We have been building the understanding to achieve this world record over the past several years, running a 5K and also going up and down stairs,” said graduate student Devin Crowley, who led the Guinness effort. “Machine learning approaches have long been used for pattern recognition, such as image recognition, but generating control behaviors for robots is new and different.”

The Dynamic Robotics and AI Lab melds physics with AI approaches more commonly used with data and simulation to generate novel results in robot control, Fern said. Students and researchers come from a range of backgrounds including mechanical engineering, robotics and computer science.

“Cassie has been a platform for pioneering research in robot learning for locomotion,” Crowley said. “Completing a 5K was about reliability and endurance, which left open the question of, how fast can Cassie run? That led the research team to shift its focus to speed.”

Cassie was trained for the equivalent of a full year in a simulation environment, compressed to a week through a computing technique known as parallelization – multiple processes and calculations happening at the same time, allowing Cassie to go through a range of training experiences simultaneously.

“Cassie can perform a spectrum of different gaits but as we specialized it for speed we began to wonder, which gaits are most efficient at each speed?” Crowley said. “This led to Cassie’s first optimized running gait and resulted in behavior that was strikingly similar to human biomechanics.”

“Starting and stopping in a standing position are more difficult than the running part, similar to how taking off and landing are harder than actually flying a plane,” Fern said. “This 100-meter result was achieved by a deep collaboration between mechanical hardware design and advanced artificial intelligence for the control of that hardware.”

“This may be the first bipedal robot to learn to run, but it won’t be the last,” he said. “I believe control approaches like this are going to be a huge part of the future of robotics. The exciting part of this race is the potential. Using learned policies for robot control is a very new field, and this 100-meter dash is showing better performance than other control methods. I think progress is going to accelerate from here.”

That gave him the idea for a Guinness promotion: a reference book to settle pub disagreements. 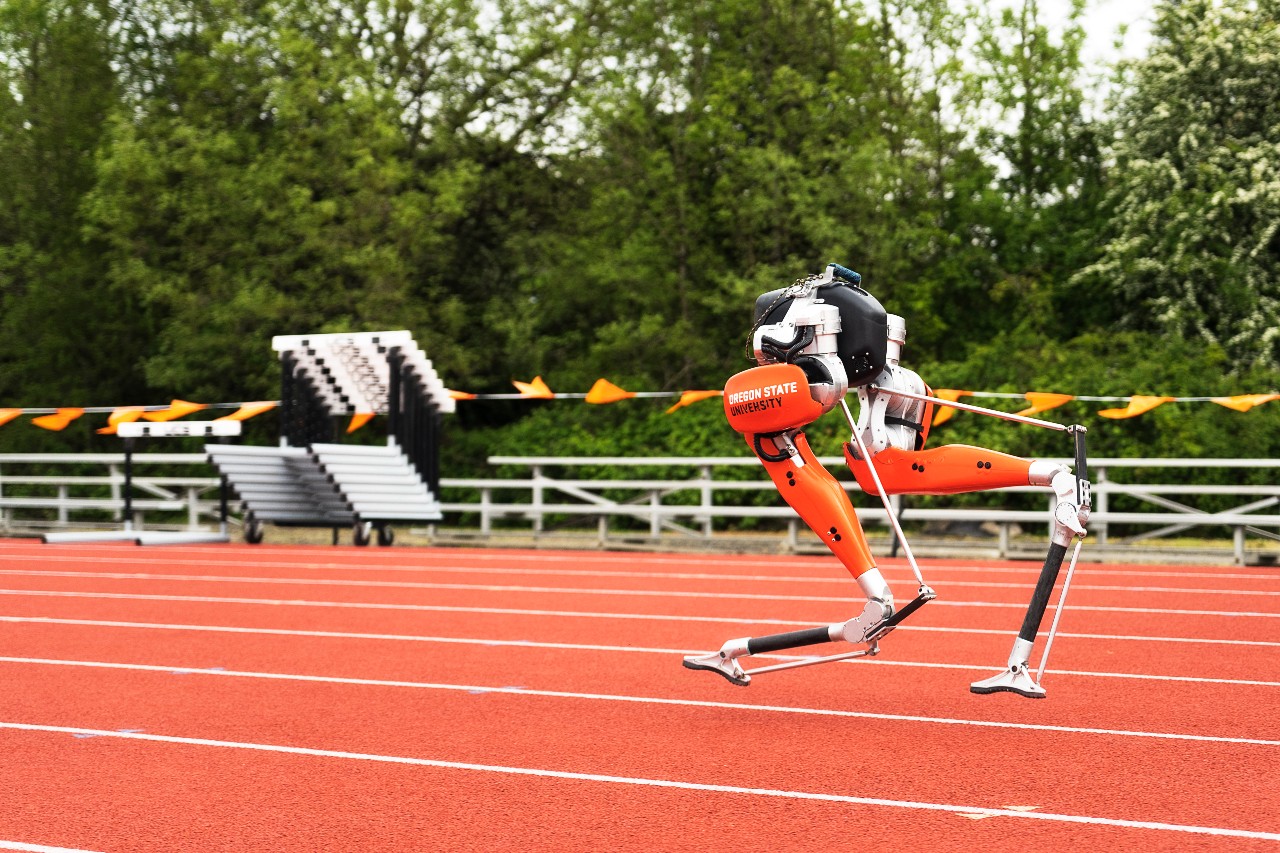