Drought-tolerant Ceanothus makes a beautiful addition to the garden

CORVALLIS, Ore. – Life is tough for plants sitting in a field without food or water.

Such was the case for wild lilac (Ceanothus) when Neil Bell, a horticulturist for Oregon State University’s Extension Service, decided to evaluate the evergreen shrubs. He planted 45 cultivars at The Oregon Garden in full sun and poor soil with no water or fertilizer.

“We wanted to test their cold-hardiness and, to a lesser degree, the quality of their blooms and pest resistance,” said Bell of the plants he assessed from 2001 to 2005, when the shrubs were not as readily available as they are today.

As Bell took on his evaluation, the most common Ceanothus on the market were the very large C. ‘Victoria’ (syn. ‘Skylark’) that grow about 9 feet tall and 12 feet wide, and C. gloriosus, a ground cover species. Those are staples but about a dozen or so – including ‘Blue Jeans,’ ‘Marie Simon,’ ‘Dark Star,’ ‘Topaz’ and ‘Tilden Park’’ – now show up in nurseries regularly.

Most, though not all, scored high in Bell’s trial, proving cold-hardy in Willamette Valley’s Zone 8 (10 to 15 degrees) winters. They also produced more-than-ample flowers and showed little pest or disease damage. In fact, he said, Ceanothus as a group did well, though some showed a little leaf burn after particularly cold winters or when temperatures plummeted early in the season before plants had a chance to harden off.

“‘Blue Jeans’ is one of the best,” Bell said. “It was never winter damaged and is one of the earliest to bloom. It’s a really cool plant.”

Ceanothus plants start blooming early in spring – ‘Blue Jeans’ begins the first part of April – and continues until July, depending on the cultivar. ‘Julia Phelps’ and ‘Dark Star’ bloom late April  through May. ‘Victoria’ comes on a bit later in May, blooming into June. The latest to bloom are the semi-deciduous types like ‘Marie Simon’, ‘Gloire de Versailles’ and ‘Topaz’, which continue to bloom into July.

“One of the things about Ceanothus,” he said, “is that it’s a reliable blue-flowered shrub. Getting blue into the landscape can be challenging. But when Ceanothus is in bloom, it’s solid, glowing blue. That’s their biggest attribute.”

Not close behind, though, is the shrub’s drought tolerance. In Bell’s evaluation, the test subjects received no water at all. In home gardens, once the plant’s roots are established after the first year, it should be treated the same.

“Watering is the single worst thing you can do for these plants,” Bell cautioned.

Ceanothus demand well-drained soil, so prior to planting correct compaction issues throughout the flower bed. Incorporating 2 to 3 inches of an organic amendment will help with soil quality in the short term. After that, no amendments or fertilizer are needed. In fact, as a group Ceanothus are known for their nitrogen-fixing ability, which eliminates the need for nitrogen fertilizer and gives them an advantage in poor-quality, dry soil.

Though most commonly associated with California and often called California lilac, Ceanothus is native to the entire West Coast from southern California up into British Columbia, as well as deciduous species in the Midwest and eastern U.S. Blue blossoms are by far the most common, but flowers also show up in white and pink.

Size and shape are variable, too.

“Because of ‘Victoria,’ everyone thinks of Ceanothus as a gigantic shrub,” Bell said, “but there’s a great range of sizes, from ground covers on up.”

There are a lot of reasons to grow Ceanothus, Bell added.

“They’re tolerant of poor, dry soils,” he said. “They’re evergreen for the most part. You can get a long bloom season if you choose correctly. They have extraordinary flowers that attract swarms of beneficial insects so the plant has ecological value. And now we know many of them are hardy here in the Pacific Northwest. They’re pretty extraordinary plants.” 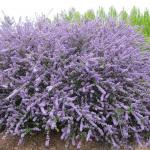