CORVALLIS, Ore. – Oregon is the first state in the nation to form a Master Melittologists program of trained community scientists dedicated to preserving and cataloguing bees that are native to the state.

Like OSU Extension Master Gardeners, the Master Melittologist program intensively trains volunteers on the meticulous work of locating and cataloging the bees that no one has seen before. While Oregon is known for honey bees that pollinate much of the food we eat, the state is also home to about 600 native bees, many that are pollinators, too.

“We can only say ‘about’ 600 because no one has ever done a complete inventory of which bees call Oregon home,” said Andony Melathopoulos, Oregon State University Extension pollinator health specialist. “This is troublesome because there have been emerging reports that some bee species across the world are experiencing decline. Without an inventory it is impossible to know whether bees in Oregon are having trouble or whether their populations remain stable."

The Master Melittologists program works with the Oregon Bee Atlas, which is responsible for surveying the state’s native bee population in partnership with OSU Extension Service, OSU colleges of agriculture and forestry, and the Oregon Department of Agriculture.

Although the Master Melittologist program just started this year, volunteers have been the driving force in the Oregon Bee Atlas since 2018. Over the past three years these volunteers have contributed 70,000 new bee records from every county in the state. These include some rare species, including a new metallic sweat bee from the Alvord Desert, a wool carder bee that was found nesting in the sand dunes around Newport and, in Ashland, the first recording in the state of a squash bee.

To become a Master Melittologist, volunteers go through a rigorous year of training that includes six online, self-paced modules covering everything from bee biology, preparing bee collections and planning a bee survey trip. Participants also get a day in the field and a day on microscopes with instructors. Once they complete all the training, they become an apprentice level Master Melittologist, the first level of the three-level program. After more intensive study of different bee groups, participants can move up if they want to dive even more into the world of bees.

“The program is rigorous, but it can be taken to any level you choose,” said Mark Gorman, a volunteer Master Melittologist in Portland. “The core structure includes bee biology and natural history along with field work, identification techniques and community outreach. But people can go further and do deep dives in specimen collecting, taxonomy, botany, natural history and other topics. This is a great citizen science project for a great cause – so very interesting and fun.”

The volunteers are finding bees in some unexpected places, including a tiny 2.5-millimeter cuckoo bee that was found next to a driveway in Burns.

“My brother and I have driven over 10,000 miles in search of native bees,” said Yamhill County volunteer Michael O’Loughlin. “It’s funny to think that one of the rarest bees we’ve discovered was in the front yard of the house where we were staying.”

The Master Melittologist program and the Oregon Bee Atlas work with the Oregon State Arthropod Collection to identify and preserve the insects.

“The insect collection at OSU has a wealth of historical records of our region’s bee fauna during the 1900s,” said Christopher Marshall, curator of the OSU collection. “The Oregon Bee Atlas participants are producing an incredible contemporary data set of our bees; one that will not only help us document changes that took place over the last century, but that will serve as a solid baseline to monitoring our fauna into the future.”

Volunteers can discover species because of the rigorous training program and support from Lincoln Best, lead taxonomist for the Oregon Bee Atlas at OSU, and the Oregon State Arthropod Collection.

“The volunteer contributions to the Oregon Bee Atlas have been constantly astounding,” Best said. “These folks are scouring the state, spending weeks in the field studying the diverse state flora and making incredible bee discoveries, one after another. Their character, camaraderie, and the seemingly endless biodiversity in Oregon, has created something I’m overjoyed to be a part of.”

In addition to the OSU Extension Master Melittologist project, Extension has partnered with the U.S Department of Agriculture to tackle a national bee survey, Melathopoulos said. One project – the U.S. National Native Bee Monitoring Network – will build the tools needed to link survey efforts across the country. 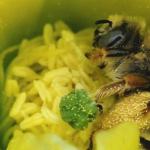