Plan ahead for winter storage of pumpkins and squash

CORVALLIS, Ore. – Halloween is still a faint dot on the calendar, but it’s not too early to plan a strategy for harvesting and storing pumpkins and winter squash.

First frost won’t hit for several more weeks, so there’s no hurry to harvest. But it’s good to have a plan once below 50-degree temperatures arrive. Tried-and-true storing techniques can keep some winter squash for several months.

"Most squashes and pumpkins are warm-season crops and are susceptible to injury at temperatures less than 50 degrees," said Gail Langellotto, an Oregon State University Extension Service horticulturist and professor. "If left out in the garden too long, they may decay prematurely in storage.”

When the weather gets below about 50 degrees for more than a week, or when there is an extended period of rain, pumpkins and squash should be brought in for storage, she said.

Squash are ready to harvest when the rind is hard enough to resist fingernail scratches. Pumpkins are ripe when they turn bright orange. Cut – do not break – stems 2 to 4 inches above the fruit. Pumpkins without stems will not store well. The exception is hubbard-type squash (hard with a green or yellow rind), which store best with stems completely removed.

Before storing, cure squash and pumpkins by keeping them dry and warm (80 to 85 degrees), if you can, for several days to heal minor abrasions from harvesting.

You should store most winter squashes and pumpkins at about 50 to 55 degrees; don’t let the temperature go below 50 degrees. Give them moderate humidity and good air circulation. A garage is usually suitable, as long as the pumpkins and squash are on shelves off the floor, Langellotto said. A layer of straw helps keep them dry. Newspaper and paper bags hold too much moisture and should not be used.

Under proper storage conditions, acorn squashes will last one to two months and pumpkins and butternut squash from two to three months. The longest keepers, including turban, hubbard and Sweet Meat squash, can be stored for up to six months. 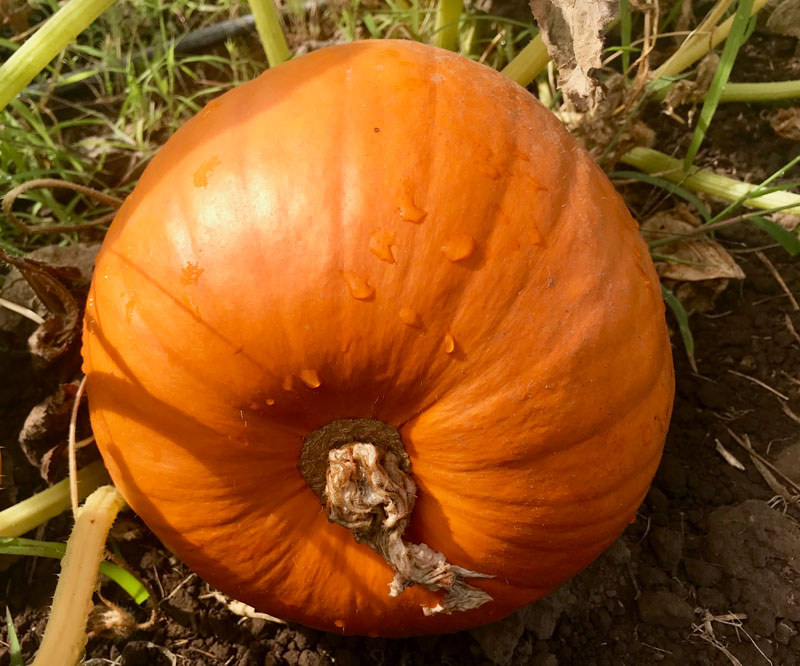