Sand, silt or clay? Texture says a lot about soil

CORVALLIS, Ore. – It’s a simple equation: If you want to grow better plants, you first need to understand the soil.

"The texture of a soil is its proportion of sand, silt and clay," said James Cassidy, a soils instructor at Oregon State University. “Texture determines all kinds of things like drainage, aeration, the amount of water the soil can hold, erosion potential and even the amount of nutrients that can be stored.”

To become better acquainted with your soil texture, he recommends using the "hand method." Dig beneath the top layer of organic matter down to the mineral soil, about 6 to 8 inches depending on how much mulch you use. Scoop out a handful of moist soil and knead it into a ball. Add water if necessary. If it can be worked into a ribbon, you have high clay content. The clay content is roughly equivalent to the length to which you can work the ribbon. Each inch of ribbon is the equivalent of up to 10% clay.

So, if you have a four-inch ribbon, the soil could be comprised of up to 40% clay. After wetting it excessively, if the soil feels gritty in the palm of your hand, you have sandy soil. The remainder is the silt content.

When people rave about "nice loam," it's the soil texture to which they are referring, Cassidy said.

Soil needs to be able to hold some water, he added, but not so much that plant roots can’t breathe. A loam achieves that balance.

Clay gets a bad rap because too much of it means it holds lots of water and the soil stays wetter, colder and is difficult to work. But don't be so quick to judge clay harshly.

"In defense of clay, clay is where the nutrients in soil are stored," Cassidy said. "Sand and silt don't store nutrients; they're just rocks."

Many Willamette Valley gardeners, though, must overcome the annual challenge of soils that are high with clay.

"The answer is to add organic matter," Cassidy said.

A key way to do this is to plant cover crops from mid-August to mid-September. Plant a mix of grasses such as annual rye grass or winter wheat and legumes such as Austrian field peas or fava beans. Cut cover crops down before they go to seed in the springtime, just as they start to flower. Let the remnants rot back into the ground, and later incorporate it back into the soil.

When preparing your plot for the first time, till it lightly with a garden fork. Cassidy advises against using rototillers in a garden. Rototilling can break up large pores in the soil structure, which are key to water infiltration and drainage.

"Think minimum tillage," he said. "If the soil is a little lumpy-bumpy, just spread a layer of high-quality compost over it and it will be fine."

But if tilling seems to be the only option do it when the soil is ready, not when it is convenient for you, Cassidy advised. Wait until the soil has the right amount of moisture. If you squeeze a handful of soil and it's too hard to break, it's too dry to till. If it ruptures in the hand when squeezed, it's good to till.

Add organic matter every year and in about five years, you will build up healthy soil with improved drainage – even with a clay heavy soil.

"There are literally a billion microorganisms in a single pinch of soil and they all need to eat," said Cassidy, who teaches in OSU's College of Agricultural Sciences. "They don't photosynthesize like plants do, but they need energy and that comes from organic matter. They consume energy best in well-drained soils with organic matter."

For more information, Cassidy recommends exploring the University of California, Davis's online soil maps. This tool allows you to enter the address, zip code, city or state of any location in the U.S. to bring up a map of the area and details on its soil type. You can also download a free application for iPhone and Android smartphones. 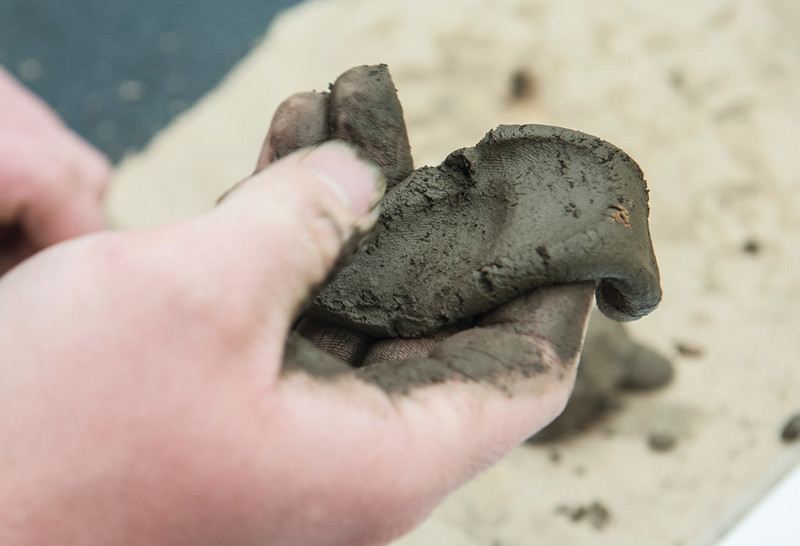